Male or Female (depending on customization)

Agent 8 (8号 Hachi-Gō, , lit. Number 8?), also referred to as Number 10,008, is the protagonist Octoling of Splatoon 2's single player mode, Octo Expansion, and the player's character in multiplayer modes, respectively. They can be male or female, and their hair style, skin tone, and eye color may vary, depending on the player's choice of customizations.

Depending on the player's choices, they can have different eye and skin colors, as well as being a boy or a girl. They wear a black leather crop-top with one long sleeve, leather pants or a leather skirt depending on gender, boots, and a type of yellow-lime bracelet on their right ankle and left wrist. However, if the player completes the DLC, they will be able to wear the gear sold in the shops. They have Inkling-like pupils in their eyes, as as opposed to Marina's and the enemy Octolings' colored-in pupil, with an "8" burned into the retina. Their ears are also notably much larger than that of enemy octolings', which are flat. Their left ear is flat, and their right ear has a ridge.

Agent 8 was an Octoling soldier for the Octarian army and had a change of heart when the Calamari Inkantation was etched onto their soul. In Octo Valley, Agent 8 encountered Cap'n Cuttlefish and Agent 3, where Cuttlefish had them attack Agent 8. The two battled until all three of them were attacked by someone and were knocked into the Deepsea Metro. Agent 8 lost their memories from injuries suffered during the fall through the ceiling and became a test subject of the Metro.

As stated by Marina, Octoling minds are altered once they have listened to Calamari Inkantation and after waking up, Agent 8 wanted to get out of the Deepsea Metro and live their life in Inkopolis, rather than return to DJ Octavio's forces. They are called Agent 8 by Cap'n Cuttlefish due to them being identified as subject number 10,008 in the testing facility since Agent 8 forgot their real name after losing their memory.

Agent 8's role is to complete a number of tests and collect four thangs to reach the promised land, or the surface. If they fail a test, a bomb attached to them is set off and they are exploded, losing a life. If you lose all of your lives, you fail the test and you have to pay to redo it.

If you lose all of your lives at least twice during a test, you are given the option to skip the test by paying the initial test fee. While this may seem good, you do not get the Mem Cake from that test, instead, you are given a grayed out one that counts to the line, but does not count to the total needed to fight the secret final boss, Inner Agent 3.

If you die four times during a Test, you are given the option of skipping that particular test, which, if accepted, does not allow you to fight Inner Agent 3 until you complete the test normally. If declined, the life count resets and you'll have to die another four times to get the prompt to appear again. This changes when fighting the mandatory Agent 3 battle and Commander Tartar to only one death.

Agent 8 shows aspects of their personality through subtle means. Agent 8 has a fondness for poetry and writes one for every mem cake collected. Agent 8 demonstrates a yearning for life on the surface, participating in Turf Wars, finding a part-time job, and dressing up in fresh clothes. This resolve is shown most strongly in the final area of the Octo Expansion, showing Agent 8 with glowing eyes as they charge through the stage with the Calamari Inkantation motivating them.

As a result of listening to the Calamari Inkantation, Agent 8 is a big fan of the Squid Sisters, anxiously planning their greeting to the pair upon reaching the surface every night. As stated by DJ Octavio’s Mem Cake, Agent 8 wishes to apologize to DJ Octavio for unceremoniously deserting the army in pursuit of Inkopolis, as well as recollecting their old Octarian friends, specifically an Octoling whom Agent 8 fondly remembers, and hoping that they do not think badly of their decision. Agent 8 comes to greatly admire Marina, to the point of expressing the notion of wanting to be just like her.

Agent 8 was also seen to be somewhat confused by Cap'n Cuttlefish's actions and personality, as seen from near the end when they awkwardly glanced at Cuttlefish when he was rapping with Pearl, and when he happily accepted being the "hype man" in the battle against Tartar. The official Splatoon 2 relationship chart reveals that Agent 8 does respect Cap'n Cuttlefish, as they think the elderly should be treated with respect. It's also revealed that they think Agent 3 is cool and that Li'l Judd is adorable.

Agent 8, being an Octoling, is apparently disgusted and quite offended at how many squid-themed objects there are in Inkopolis such as Squid Bumpers, and asks people to consider how Octolings see the world. They are said to love the sea breeze and will go to the shore to feel it even though they cannot swim.

Agent 8 has shown a fondness for both Flow and Craymond. Interestingly, they are also said to enjoy listening to Sheldon rambling, in contrast to various other characters, possibly due to Octarian culture centering around technology and weaponry. They are also stated by their Chaos vs. Order description to be obsessed with cleaning, not being able to sleep before every nearby weapon is clean. Sheldon is therefore said to have considered hiring them.

Agent 8 appears in Chapter 24 of the Splatoon manga as an Octoling boy with red eyes and the Mohawk hairstyle, and wears a pair of Squidlife Headphones, Null Boots Replicas, and unique pants and top, and wields a Blaster.

Due to forgetting his name, Cap'n Cuttlefish refers to him as Agent 8 and Goggles refers to him as Hachi (Japanese for 8). A female Octoling named Nana (Japanese for 7), wearing the full outfit Agent 8 wears in the game, also appears initially from Hachi's flashbacks, and is not seen physically until Chapter 26. Two other Octolings, Afro and Pony appear in Chapter 28 after the NILS Statue is destroyed and are also wearing the full outfit that Agent 8 wears in game. They are all set to be Hachi's teammates where they all partake in Turf Wars after reaching Inkopolis.

As Hachi and Nana wear the clothes that Agent 8 in game wears, but without the yellow tags on their wrist and ankle, in the flashbacks taking place before they were taken to the Kamabo Co. facility, Afro and Pony also seem to be lacking the yellow tags when they were rescued. 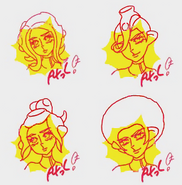 Marina's drawing of Agent 8 before the Turf War mission reflects their gender and hairstyle. 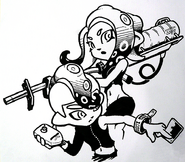 Agent 8 as a girl or boy with weapons 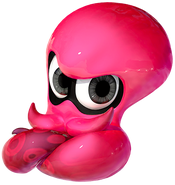 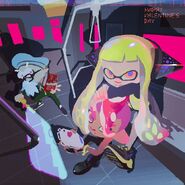 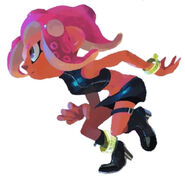 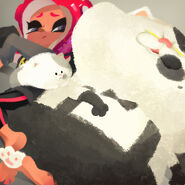 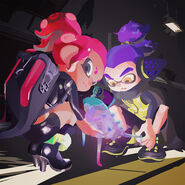 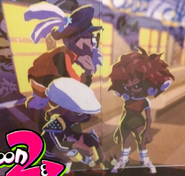