Ammo Knights (Japanese: カンブリアームズ Kanburi Arms) is a shop run by Sheldon in Splatoon and Splatoon 2. It can be accessed from Booyah Base. Here, players can purchase weapons with in-game money earned in multiplayer matches and amiibo challenges. Sheldon will add more weapons as you level up, as well as through progressing in the single player campaign.

Ammo Knights sells a variety of weapons being unlocked from lvl 1-50. Plus weapons unlocked through Boss Battles.

Ammo Knights sells weapons of all variety. It also features a testing area to experiment with potential purchases.

The Shop is owned by Sheldon who presumably is carrying on the work of his grandfather. 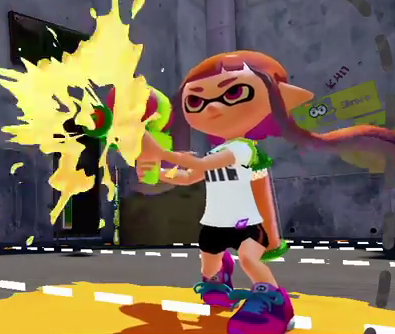 The Shooting Range can be accessed from Ammo Knights by pressing Y Button. This location lets the player use weapons in a closed environment before and after purchasing them. It is comprised of a long, narrow area with dashed lines to test range, three squid dummies, and grated platforms attached to the walls. A ramp from this area leads to a smaller section with nine squid dummies, six small and three large, to test weapon power. Three small dummies have Defense Up mains between one and three. The entrance to Ammo Knights itself is also visible from the Shooting Range; there's a door with two flickering signs above and beside it, along with boxes and what appears to be an early version of a Splat Charger.

The exterior of Ammo Knights.

The interior of Ammo Knights.
Add a photo to this gallery

Retrieved from "https://splatoon.fandom.com/wiki/Ammo_Knights_(Splatoon)?oldid=45050"
Community content is available under CC-BY-SA unless otherwise noted.