The Blaster is a Main Blaster Weapon in Splatoon, Splatoon 2 and Splatoon 3.

The Blaster shoots special ink rounds that burst like fireworks after traveling a certain distance. These bursts can deal damage in a wide area, making it great for exposing hidden foes. It is one of the most powerful shooters in the game. It is a one-hit-splat, but has a very slow firing rate.

Shooters are the backbone of (almost) any good team. They're versatile and varied with each weapon, and cover plenty of ground, as well as apply more pressure to the enemy team than either charger or roller weapons.

The Blaster is the strongest shooter of all, able to immediately splat an unlucky opponent who is within range and receives a direct hit. Even if it's not a direct hit, there's a small explosive radius that makes it lethal in two shots, provided the blast hits both times, and the blast even lets it check around corners without putting itself into danger. Unfortunately, it's also a short range weapon (shorter range than the Aerospray RG even). This makes the Disruptor a powerful tool in this set, since it slows enemies down enough for you to catch up to them and hit them hard. Afterwards, you can use the Killer Wail special to hold your opponent you've just splatted up at his spawn, or you can just use it to deal with someone pressuring you outside your range.

Tips for facing each weapon type 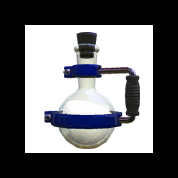 The Disruptor is the Blaster's sub weapon in Splatoon

The Killer Wail is the Blaster's special weapon in Splatoon

Toxic Mist is the Blaster's sub weapon in Splatoon 2

Splashdown is the Blaster's special weapon in Splatoon 2