Splatoon Wiki
Register
Don't have an account?
Sign In
Advertisement
in: Characters, Shop Keepers, Booyah Base,
and 11 more
English

Crusty Sean is a character in the Splatoon series. He is a Japanese tiger prawn who runs the shoe shop Shrimp Kicks in Splatoon, runs the food truck Crust Bucket in Splatoon 2, and travels the world while being supported via SplatNet 3 in Splatoon 3.

Crusty Sean is known to be carelessly friendly and is obsessed with wearing many of his favorite shoes all at the same time thanks to having many legs.[1] While his "fried" body gives him the look of a tempura, it is actually just a slightly morbid designer jacket.[2]

Sean is a bright red prawn. Besides his fluffy tempura jacket, he wears a blue beanie and violet purple sneakers on all of his legs, except his front claws. He stands on one pair of legs while keeping the other three pairs folded in front of him. Crusty Sean has pink, yellow, seafoam, and magenta colored sneakers on his 3 pairs of legs that he does not stand on as seen above. He also has a pair of red antennae sprouting from the sides of his face. 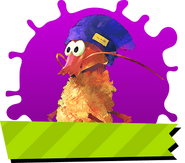