Leader of the Octarian Army

DJ Octavio (DJタコワサ将軍, DJ Takowasa shōgun?, lit. General DJ Takowasa) is the leader of the Octarians, the main antagonist, and final boss of both Splatoon and Splatoon 2's single-player modes. In the latter, he appears alongside Callie in the final boss, whom he has brainwashed, and is trapped in a snow globe-like tank near Craig Cuttlefish or Marie after being defeated for the first time.

Unlike most Octarians, which appear to be severed tentacles of octopuses, DJ Octavio is an octopus in his entirety. He is a dull red-violet with darker areas around his eyes and tentacles and appears to be perpetually angry. When he is angry, his eyes slant down even more, resembling furious eyes. He wears a large gold helmet in the style of kabuto with an octopus-shaped emblem on the front, and one of the two tentacles that are always crossed in front of him bears a large, green, X-shaped scar identical to the ones seen on other bosses. It is unknown how he and the bosses get their scars, but it is likely DJ Octavio got his during the great Turf War.

In Splatoon 2, Octavio's appearance has also changed: his kabuto helmet is black with golden accents and he wears a pair of shutter shades.

In Splatoon 3, He seems to be wearing a hard hat with a camera attached to it, as well as safety goggles. He still wields his signature wasabi.

His humanoid form, found in a Sunken Scroll, wears the kabuto hat alongside what appears to be casual sweatpants and a shirt with sleeves resembling those on kimonos. In the Great Turf War, he turned into his humanoid form for its majority, as a picture shared in Marina's chat room shows this. In this form his tentacles hung out the kabuto, resembling his cephalopod form's tentacles.

Despite some early victories for the Octarians, a combination of good luck, superior tactics, and a higher number of limbs resulted in the Inklings being victorious, forcing Octavio and the rest of the Octarians underground into domes later called Octo Canyon and Octo Valley.

Around 100 years later, during the events of Splatoon, dwindling energy reserves underground led the Octarians, still led by Octavio, to steal the Great Zapfish and a series of regular Zapfish that the Inklings used for power. To counteract this before the problem got too severe, Cap'n Cuttlefish secretly recruited a young Inkling that he nicknamed Agent 3 to join his New Squidbeak Splatoon, intending to recover the Zapfish and defeat the Octarians again.

However, after Agent 3 defeated the Octowhirl, Octavio kidnapped Cuttlefish himself, forcing Cuttlefish's granddaughters, Agents 1 and 2, to guide Agent 3 to Octavio's base. Finally, in Enter the Octobot King!, the group was reunited as Octavio battled the New Squidbeak Splatoon. During the battle, the two agents revealed their true identities as the Squid Sisters and overrode Octavio's music, freeing Cuttlefish and spurring Agent 3 to finally defeat him, rescuing the Great Zapfish and saving Inkopolis in doing so.

After this fight, Octavio is kept imprisoned in a snow globe next to Cuttlefish in Octo Valley. If the final boss battle is repeated, it is explained that Octavio broke out while Cuttlefish was distracted by eating crabby cakes.

Around nine months after the Callie vs. Marie Splatfest, Cuttlefish deserted his shack in Octo Valley, giving Octavio the chance to escape. Marie was the first person to notice, after Callie's disappearance, and shortly afterwards, Octavio stole the Great Zapfish a second time and fled to Octo Canyon. As a result, Marie stationed herself there and recruited a new young Inkling as Agent 4, and the two worked together to rescue Callie and the Great Zapfish.

Eventually, in Tide Goes Out, Octavio was discovered, having brainwashed Callie into working for him. In the ensuing battle, Agent 4 defended their attacks for long enough so Marie could shoot off Callie's hypnoshades, returning her to her normal self. With some help from Sheldon, the group eventually defeated Octavio a second time, imprisoning him in a new snow globe in Octo Canyon. If the battle is repeated, it is explained that Octavio was able to escape thanks to Callie wanting to try on the hypnoshades again.

In the Splatoon 3 trailer on 09-23-2021, DJ Octavio can be seen as part of the single-player in the artwork and in the Nintendo Direct flying in the air before falling off of a cliff in a mecha suit, presumably the Octobot King III.

During an interview. Toru Minegishi (the sound director of Splatoon) revealed that the techno-like music in Octo Valley was actually composed by DJ Octavio and his direct subordinates. Also, it is as if like they broadcast their music in order to control the many Octarians.[1]

Splatoon is regionalized depending on if you are in the EU (Europe), NA (North America) or JP (Japan). DJ Octavio's dialogue throughout the battle differs in these versions. In the JP and EU versions of the boss fight, the dialogue is more straightforward, whereas the NA version contains a number of puns and music-related insults, making the NA version dialogue seem quirky and less serious. 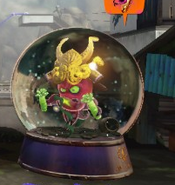 DJ Octavio trapped in a snow globe after being defeated.

Alternate icon, used before you meet him (S1) 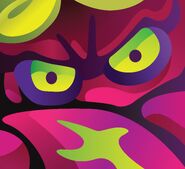 DJ Octavio while being fought

DJ Octavio in his globe during Splatoon 2, complaining how he is hungry

Octavio in trailer sliding down the canyon wall