Male
Diss-Pair (JP: ガッショクキン, Gasshokukin) is a music duo comprising of the former Squid Squad bassist Ikkan and the Octoling DJ, Warabi. Their music was added to Splatoon 2 in the Version 4.1.0 update.

Their style is Electronicore,a mix of heavy metal and EDM. They also often feature low, husky vocals, similar to those of the Bottom Feeders.

After Ikkan broke up with Squid Squad, he met Warabi in a tour overseas, and after some talk the two quickly joined together and decided to start a band, although in others perspective it looked more like they were fighting.

He is an Inkling and the band's bassist, formerly a member of the Squid Squad. He theorizes that the Squid Squad broke up at the peak of its fame, because everyone was self-indulgent, leaving little room for tension in the music's composition. He is a fan of metal, utilizing deep riffs and husky vocals he occasionally used in the Squid Squad, and pairs himself with the younger Warabi, trusting that they will keep up the tension in their music.

He is an Octoling who is described as an up-and-coming prodigy beatsmith. He's a successful musician who regularly travel around the world due to his parents being famous actors. As a result, he was exposed to many different types of music at a young age. He grew up with a classical gifted education, but got into electronic music in his teenage years, becoming famous by handling remixes of other popular artists. 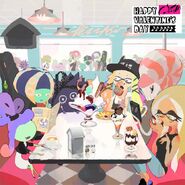