The Drizzler is one of the Boss Salmonids appearing during Salmon Run.

The Drizzler's appearance is extremely hard to administer, as it always usually hides under its umbrella. It can be deduced, however, that it's actually a Chum that could be taller than other Chum to distinguish its boss quality. Unfortunately, though, this is unclear.

Its armor is actually an umbrella and a Salmonid is hiding under it. They lock on to a target and fire a missile toward it. The missile stops in the air after a set distance and pops open, revealing an Ink Storm. After about two seconds, the Ink Storm will fly into the air and activate, causing a traveling cloud of Salmonid ink to appear.

Upon shooting the missile, the recoil will cause the Drizzler to go upside-down, revealing the one using it, or its weak spot.

During the 2-second window between when the missile pops open and when the Ink Storm fly toward the air, the Ink Storm is vulnerable. During this time, you should attack the Ink Storm. If it takes damage, it will be sent in the opposite direction, exploding upon reaching a solid surface or a Salmonid and spreading your team's ink color and neutralizing the Ink Storm cloud from appearing.

In addition to this Ink Storm strategy, the Drizzler also occasionally jumps and floats to a different spot on the map. The way he does this actually somewhat resembles the midair floating of Parasol Kirby in the Kirby series.

If an Ink Storm is successfully fired back into a Drizzler, the Drizzler will die, dropping Golden Eggs like usual.

The vertical angle at which the Ink Storm is fired back is always corresponding to the angle it takes to hit the Drizzler that fired it; aiming at the top or the bottom of the Ink Storm changes nothing. 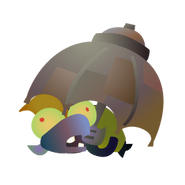 Icon of the Drizzler from Splatnet 2.
Community content is available under CC-BY-SA unless otherwise noted.
Advertisement