Flow (ミウラ, Miura?) is a Sea slug that manages Inkopolis Galleria. She runs Headspace, which sells headgear. She is accompanied by Craymond, an emperor shrimp, on her head.

Flow's clothing style resembles a 1960's hippie look; her clothes are very loose and baggy, and their colors are more earthy in tone. She wears a purple shawl with tassels over a grey shirt and a long, black skirt. She has black sandals with red jewels in the center. She wears a beaded black-and-gold necklace with a squid-shaped gem in the center and 4 white horns hanging down from the bottom of the necklace.

She has a large orange mantle on her head, mimicking the shape of a hat, with a pair of orange/purple-and-mint striped rhinophores on top, upon which Craymond sits. She has two mantle piercings: a gold ring just left of her face, and a jade ring on the far left side. Her hair-like tendrils are orange with a gradient pink at the tips, and they come down to her shoulders. She wears an orange and jade headband with two flowers, one white and the other jade. Flow's eyes are green with a dotted line pattern around her pupil and large, pink-and-green eyelashes. There are two white markings on each of her cheeks. Her one visible foot is two-toed. A long black tail with orange gills trails behind her.

Flow is relaxed and spacey, resembling the personality of a 1960s hippie. The local Inklings sometimes refer to her as their "crazy aunt"

Flow speaking to the player 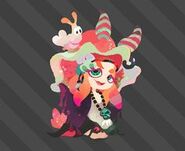