Grizzco Industries is a Company featured in Splatoon 2. The head of the Company, Mr. Grizz, recruits Inklings, and Octolings if the Octo Expansion has been completed, to participate in Salmon Runs, which take place every 70 years. By collecting Golden Eggs in this mode, Inklings are granted rewards. They aren't always hiring, which means that the player must find the right time to do their job. You can check the Stages to see when Grizzco is hiring. The Grizzco office is located behind where Marie is seen to lead players to Octo Canyon to play the Hero Mode. Make sure to check back often to see if the office is open to take on Salmon Runs. Also, if Mr. Grizz is hiring, a paid advertisement for the Salmon Runs will be shown at the end of Off the Hook's broadcast along with the month's gear when the game starts up after they show the maps for all the game modes, or the maps if it is during a Splatfest.

All four players who participate in Salmon Runs use orange, pink, or purple-colored Ink and clothing. 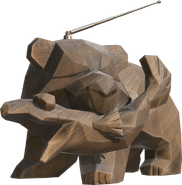 Mr. Grizz. It is also plainly seen that the tip is a radio transmitter.

The inside of Grizzco
Community content is available under CC-BY-SA unless otherwise noted.
Advertisement