This article is about the weapon. For the weapon's class, see Category:Splatling

The Heavy Splatling is a Main Splatling Weapon in Splatoon, Splatoon 2, and Splatoon 3. It was released in the August 2015 major update.

The Heavy Splatling must be charged up. It has a charging reticle, like Charger weapons, which can be filled up to twice as the fire button is held down. When the button is released, it unleashes a barrage of powerful ink shots that have extremely long range. The charge on the reticle winds down as the Heavy Splatling fires, so its barrage lasts an amount of time equal to how long it was charged. It comes with the Splash Wall as its Sub Weapon and the Inkstrike as its Special Weapon. Its damage is comparable to the Jet Squelcher because it takes four to six shots to splat an opponent.

Splatlings have a special gimmick that means they require charging before releasing a huge bombardment of ink in a short amount of time creating a huge amount of devastation. Splatlings generally have a decent range and how long they fire ink for depends on how long you charge for. Their mobility is often limited while firing leaving them exposed at times.

The Heavy Splatling has one of the best ranges in the game and outranges all Shooter weapons making it recommended for long range assaults. It also has the Splash Wall to protect you from incoming shots from enemies and enable you to charge without the fear of being attacked. In Splatoon 2, it has the Sprinkler sub.

Tips against each weapon type

An Inkling girl with the Heavy Splatling

An Inkling boy with the Heavy Splatling

The Heavy Splatling as shown in the Japanese advertisement 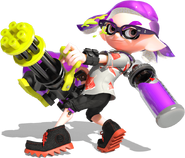 A Inkling using the Splatling in Splatoon 2