View source
watch 01:12
Ink in Splatoon Games
Do you like this video?
Play Sound

Ink (インク) is the main projectile used in the games Splatoon, Splatoon 2, Splatoon 2: Octo Expansion, and Splatoon 3, as well as a way to get around. It comes in a variety of team-based colors, and is stored and measured with the player's Ink Tank.

Ink can be used in a variety of ways such as being used as a projectile.

After getting hit by enemy ink in some way, depending on the weapon used, an Inkling or Octoling will get splattered (known as "splatted") and will later respawn. If they are not splatted, the Ink will still give away their location to the enemy team on the map.

Ink can also be fired at the ground, walls, and other surfaces. Once a surface is inked, Inklings and Octolings in squid/octopus form can swim through it, allowing them to traverse the land very fast. When staying still in the Ink, squid form Inklings, and octopus form Octolings, can hide and ambush enemies and when moving they will only create small ripples. You can only swim in ink that is your own color.

In Hero Mode, Ink is used in even more ways. Ink Railings allow for fast transportation while in squid form, as Inklings can swim from one end of the railing to the other. Sponge Blocks, when squirted with ink, will expand and then can be used as a platform.

The way to get more ink to use is to swim in ink already splattered on the ground. Ink can also slowly regenerate when weapons are not in use.

In multiplayer, both teams of Inklings or Octolings use one of the following colors:

In Octo Valley, Inklings use several other colors inaccessible in Multiplayer. Colors with identical names have different shades from their Multiplayer versions.

Salmonids use these colors:

Octarians use these colors: 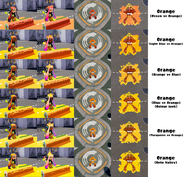 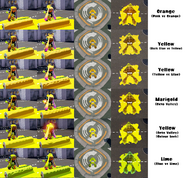 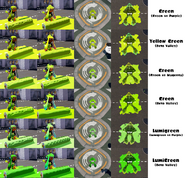 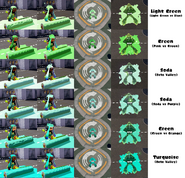 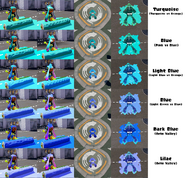 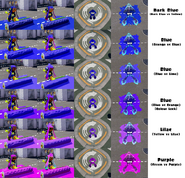 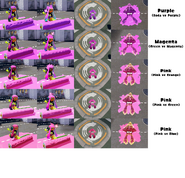 Images gathered by krak-on-splat-roller on tumblr.

"Milk Tea" while the special is activated.

"Milk Tea" Team getting ready to engage in a Turf War.

Images from various sources on Miiverse.