The Inkbrush is a Main Roller weapon in Splatoon and Splatoon 2. The weapon was released on June 6th, 2015 in Splatoon.

The Inkbrush is a Roller-type weapon. It comes in a set with the Sprinkler and the Inkstrike. It is similar in ability to the Splat Roller, but covers a narrower area at a much higher speed. Its shake time is also low, allowing for rapid paint flicks which fit the paintbrush theme. However, the Inkbrush is weak, as it takes 5 direct hits from the brush or 4 paint flicks to splat an enemy. With the rapid shaking ability, paint flicking is a better option than running someone over, as you will get knocked back several times by direct hits. Much like the Splat Roller the Inkbrush can be used as a sort of melee weapon that splatters some ink in front of an Inkling. It was released in a post-release update in the game.

"A newly developed weapon with high mobility and a sturdy brush design. Its ink trail is narrow, but it inks the ground at incredible speed and delivers swift close-range attacks." 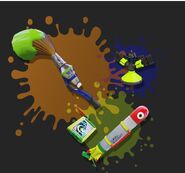 Inkbrush shown with its weapon set.

Inkbrush being shown in the 4/2/14 Japanese Nintendo Direct.

The Inkbrush in testing mode. 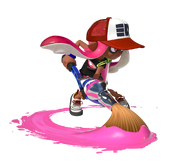 An Inkling girl with the Inkbrush.

An Inkling boy with an Inkbrush 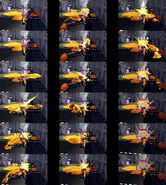 Add a photo to this gallery
Splatoon 2's Weapons
Retrieved from "https://splatoon.fandom.com/wiki/Inkbrush?oldid=52025"
Community content is available under CC-BY-SA unless otherwise noted.