When the Inkzooka is fully charged (Or acquired in Hero Mode from a Canned Special), the user is able to shoot about 1 shot per second within roughly an eight-second time period. One-shot from the Inkzooka is powerful enough to splat any opponents caught in the blast. 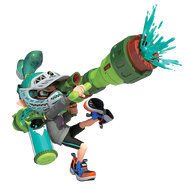 Artwork of a cyan Inkling while using an Inkzooka

The Inkzooka while being used in a Turf War

Retrieved from "https://splatoon.fandom.com/wiki/Inkzooka?oldid=50805"
Community content is available under CC-BY-SA unless otherwise noted.