Splatoon Wiki
Register
Don't have an account?
Sign In
Advertisement
in: Characters, Shop Keepers, Booyah Base,
and 8 more
English

Not to be confused with Jelfonzo.

Jelonzo (Japanese: エチゼン Echizen) is a blue jellyfish that owns Jelly Fresh, a clothing store in Booyah Base in the first game.

Jelonzo is the charismatic clerk that runs the clothing shop. With his uncanny sense for the hottest trends, he is viewed as a fashion god of sorts by all the young squids in town. He hails from distant waters and has a strange way of speaking that can make it difficult to understand him, but that may be one of the secrets of his success.[1] His speech looks like a cruddy translation of a Japanese version of the sentences, in a manner similar to Fawful from the Mario universe.

He looks much like the other jellyfish in Inkopolis, albeit larger. His jelly is blue-purple, and he wears a white and purple baseball cap with a purple brim, a blue and black striped scarf, and a white t-shirt bearing the image of some sort of fuzzy black eyeball. 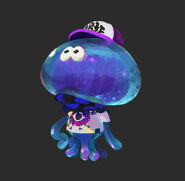 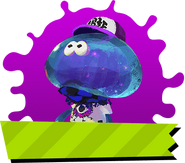 Jelonzo's moves. Appears to be doing "the wave" 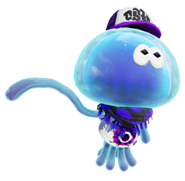