These are all Sunken Scrolls and their contents, from their respective stages of Hero Mode of Splatoon. 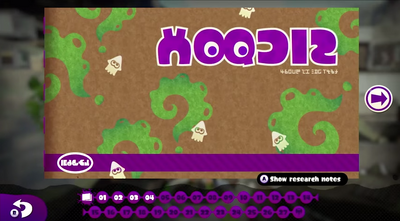 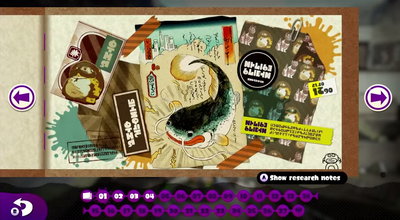 Since time immemorial, a rare type of electric catfish known as the Zapfish has been prized by Inkling society as a source of energy. In fact, the entire city of Inkopolis is powered by a single 100-year-old Great Zapfish. 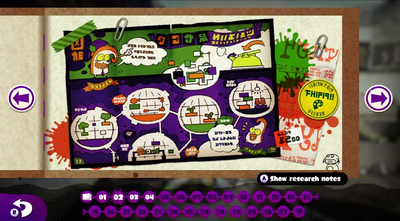 "We Octarians dwell in a world deep underground. The individual caves in which we live are connected by a network of transport devices known as kettles."
"Wow... You learn something new every day!" 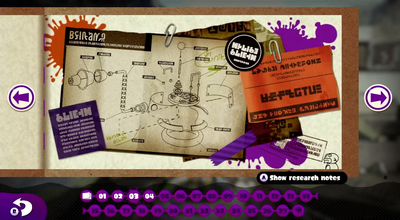 This seems to be an Octarian assault vehicle, but it doesn't appear to have an engine. The big question, then... how does it move? It's frighteningly clear that the source of Octarian power lies outside the ream of established science. This scroll was found in a deep rock layer, its age estimated at approximately 2,000 years. It details the ancient Turf Wars of the time. It seems the basic four-versus-four battle format has already been established at this stage. 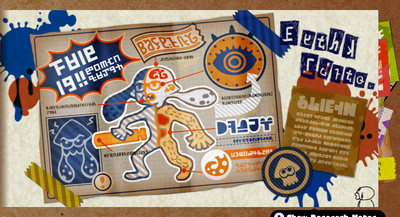 "The Terrifying Biology of the Inkling!"
"Strength: Can leap up to 5 ft." "Brain: Simple and predatory"
"Bones: None!" "Eyes: Can spot prey from 100 yd. away"
"Defense: High-pressure, high-capacity ink sac" 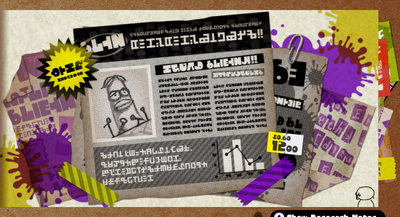 "The Department of Energy has announced that further declines in the availability of electric power are likely to occur in the near future. With the underground domes also deteriorating rapidly, the future does not look bright." 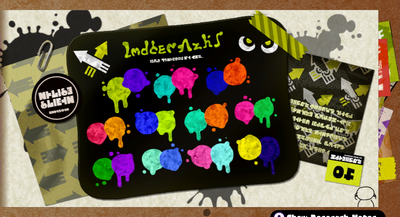 The ink sprayed during a Turf War vanishes almost immediately after the battle ends. How environmentally friendly! (And incredibly convenient!) 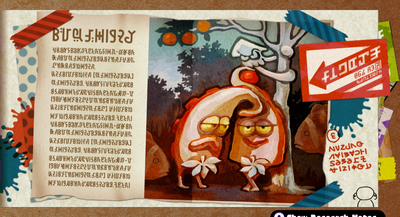 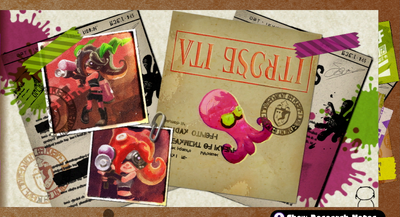 It seems that some Octarians can assume humanoid form. These specimens have superior physical capabilities and are highly aggressive. High-ranking individuals have kelp on their heads. But what motivates them, if anything at all? 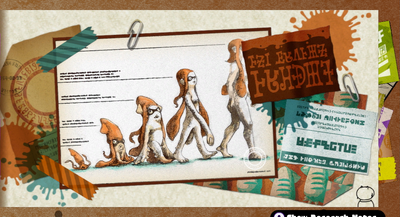 With the creatures of the surface driven to extinction by rising sea levels, the ancestors of the Inklings were free to haul their 10-legged bodies up onto the abandoned land. This is how the Mollusc Era began. 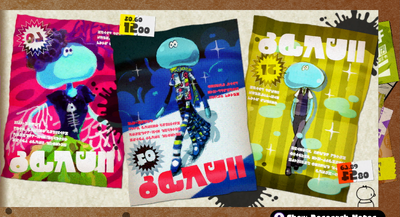 Twice a year, the Inkopolis Collection fashion show captures the hearts, minds, and wallets of the city's youth. Is there no room in these creatures' minds for anything but battle and fashion? 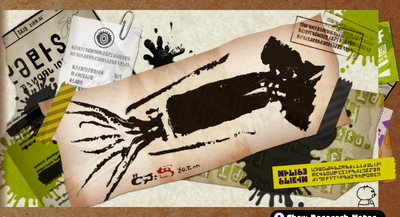 The first battles of the Great War ended in victory for the Octarian forces. The diligent Octarians easily dominated the Inklings, who were unable to wake up early enough in the morning to defend themselves. 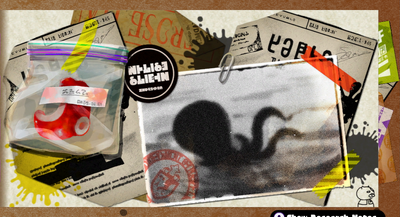 Heralded by loud explosions, the "Great Octoweapons" quickly stormed the Inklings' central stronghold. Victory for the Octarians seemed all but certain, but due to a plug being carelessly pulled from its socket, their hopes were dashed. 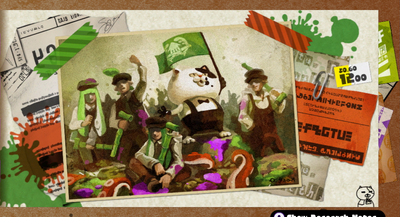 Lady Luck shone down on the Inklings, and historians today agree that the Inklings' victory over the Octarians was mostly due to their superior number of limbs. 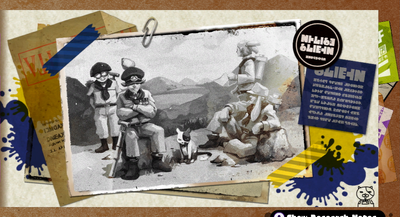 This is the only existing photograph of the legendary Squidbeak Splatoon. The young man folding his arms appears to be the leader. When this picture was taken, the Great Turf War had been raging on for over a year. 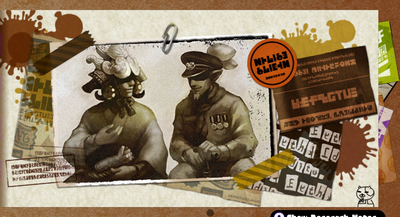 Before the Great Turf War, there were amicable relations between the Inklings and the Octarians. They couldn't have dreamed that rising sea levels would force them to battle fiercely over the remaining territory. 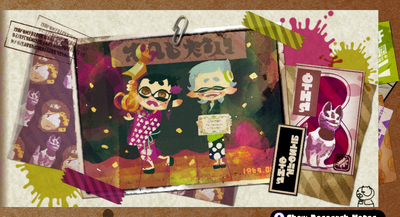 "These two cousins from Calamari Country won Inkopolis's first annual Youth Folk-Singing Contest. Their remarkable voices earned them a standing ovation from all present and catapulted them into the spotlight!" 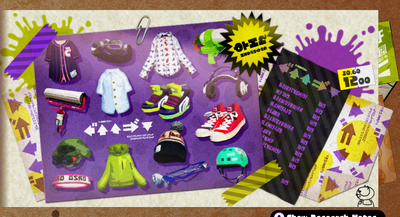 "It's Black Friday every day at the Booyah Base Ultra-Mega-Hyper Sale! Every deal's a doorbuster! If you want to be the FRESHEST squid in Inkopolis, you CANNOT miss this incredible shopportuntiy!" 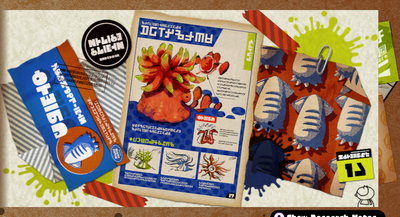 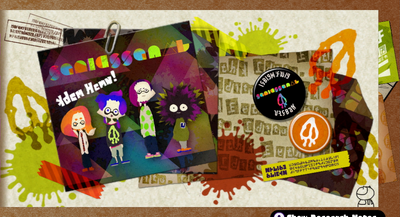 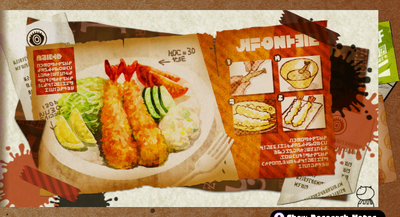 What is this? It looks just like the proprietor of the shoe shop! Could there have been an ancient creature that consumed prawns as food?! A terrifying thought indeed... "From the depths of the sea we emerged long ago, seeking the light of the surface. In searching of still greater lights, we now send this message into outer space, sealed in a disk. Perhaps one day, we will encounter other intelligent life. 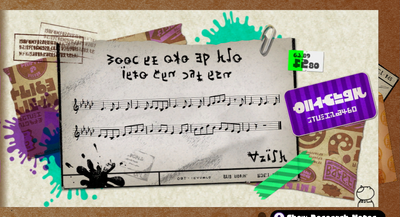 The customary chorus of Calamari Country.
Nowadays, this song and dance may as well be carved into the very DNA of all Inklings. It began as a way to celebrate and show respect for the bounty of the sea. 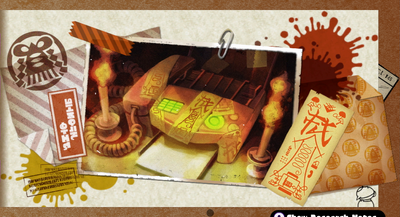 "Why are we here? For what purpose do we exist? We must not dwell on these questions. We can merely trust in the will of the universe and spend our days and nights in harmony with the world, celebrating this festival called Life." 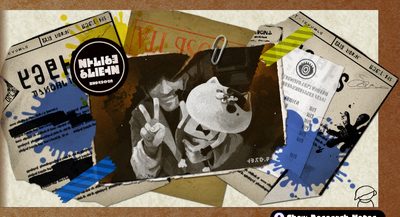 "Though academic circles warn of rising sea levels, the policy makers pay them no heed. At this rate, human civilization may be lost beneath the tide. Will even this furry fellow be consumed by the raging ocean?" 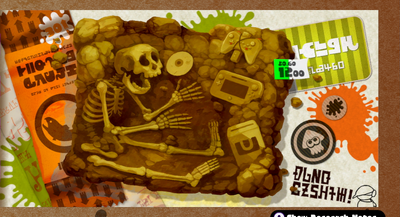 A 12,000-year-old fossil of a creature with an odd internal skeleton. Its small skull indicates the creature was likely primitive with little intelligence. This specimen appears to have been fossilized in the middle of some kind of ritual. 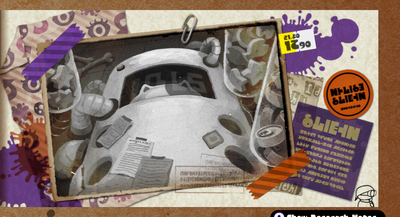 "Oh, my beloved Judd... It seems the day has finally come. This capsule is designed to remian cryogenically sealed for 10,000 years. Good-bye, my purrfect little kitty cat. May your meows echo through the ages."

Retrieved from "https://splatoon.fandom.com/wiki/List_of_Sunken_Scrolls?oldid=43204"
Community content is available under CC-BY-SA unless otherwise noted.