Marie (ホタル, Hotaru?, lit. Firefly Squid), is a former host for the Inkopolis News program, which announces events, new DLC and other battle-related news. She used to host with Callie and manage Splatfests. In Hero Mode, it is revealed that the she is Craig Cuttlefish's granddaughter. She is also Agent 2 of the New Squidbeak Splatoon. Despite their title being "Squid Sisters", her and Callie are actually cousins.

Her tentacles, which are milk-white, are tied in a large bow on the right side of her head, with the ends wrapped around to the other side and curling up slightly at the ends with an unsaturated gray gradient. She has large, downturned eyes with gold irises and light brown pupils in the shape of a plus. Her eye markings end in small, slightly curved points, and her eyebrows are large and oval shaped. Her ears are slightly narrower and longer than those of the average Inkling, and on them she wears a pair of chunky milk-white earrings.

Her outfit, which has no sleeves and ends in a skirt, is black with a reflective texture. On the front are three green marks, which, somewhat morbidly, are made to look like the cuts made in squid when it is cooked, and the inside skirt facing is also green. With this outfit, she wears lime green tights, black shorts, white gloves, and a small, white, shirt collar necklace. Marie also wears a pair of black wedge shoes with a texture similar to leather, which have a shiny green material on the bottom and two green buttons on either side of the ankle. She wears a green and white hat resembling a calamari ring, and has a beautymark on her right cheek.

During a Splatfest, any part of Marie's appearance that is normally green will change to match the color of her Splatfest Team, including the ends of her tentacles.

As a child, Marie wore traditional Japanese-style clothing, and her tentacles were much shorter and messier. Her first outfit, shown in Sunken Scroll 17, consisted of a black yukata with a white polka dot pattern at the bottom, and a pair of thick black zōri with pink thongs. On the left side of her head, she wore a green and white accessory that simply looked like a smaller version of her current calamari hat.

For her second outfit, which was shown in promotional art for the Japanese Grasshopper vs. Ant Splatfest, Marie wore a white yukata with a seashell pattern in lime green, navy blue, and dull purple. The calamari accessory had taken on a dark purple tint in addition to its existing colors.

In Splatoon 2, Marie has grown taller and sports a new outfit: a traditional Japanese-style clothing that resembles the outfit that she wore as a child. Her outfit consists of a black and dark grey kimono with gold triangle patterns around the waist and carries a green parasol with the Cuttlegear brand logo on it. She also wears a pair of traditional Japanese sandals, or 'geta', and a different, pink, headpiece described in The Art of Splatoon 2 as being reminiscent of cooked shrimp. The kimono bears the Kensaki (Toni Kensa) family emblem, although the connection is unknown, and she carries a green and white oil-paper umbrella. However, during the final boss fight against DJ Octavio and a brainwashed Callie, Marie will arrive with Sheldon, wearing her Squid Sisters outfit again to help Callie break free of Octavio's brainwashing and rejoin her to beat him for good.

In Splatoon 3, Marie sports a new outfit: a new outfit similar to her attire from the first game. She wear a long white jacket with three bright yellow marks, which, somewhat morbidly, are made to look like the cuts made in squid when it is cooked, she wears grayish black tights, and black gloves. She also wears a pair of black tabi socks with visible stitches that resemble the Non-slip Senseis. There are lime green non-slip pads attached to the soles, and she carries her Japanese oil-paper umbrella from Splatoon 2. Her green and white calamari accessory is now black and white with dark greenish spots, her tentacles are now white with a faint yellowish green tinge at the ends of her tentacles.

Both Squid Sisters are clever and passionate about not only their music, but entertaining their fans. While Callie is optimistic and peppy, with the occasional sarcastic remark. This makes her a good foil to Marie, who has more pronounced sarcastic and has lazy tendencies.

Inkopolis News is Inkopolis' news program, announcing events and updates on new features in Splatoon. Inkopolis News Studio can be found on the upper level of Inkopolis Plaza, where the Squid Sisters can be seen in their studio.

Marie used to host Splatfest events, a multiplayer event in which players of a region divide into opposing team, with Callie and Marie each representing a different team. Callie's team is always shown on the left side of the Splatfest artwork and Marie's team is on the right. For the duration of the event, their clothes and tentacles temporarily change color to match that of their team's Ink and they perform a live concert in Inkopolis atop trucks outfitted with stage equipment.

At the top left corner of the box showing the player's Splatfest Power is a pair of eyes representing the Squid Sister they have sided with: players on Callie's team see her angular eyes, and those on Marie's team see her heavy-lidded eyes. Both versions have their signature pupils, but with a dark red color instead of the usual gold.

During the results of the 15th North American Splatfest Early Bird vs. Night Owl, Callie got sick of Marie's attitude, causing the duo to argue about who won more Splatfests before getting personal. This hinted at the announcement of the final Splatfest; Callie vs. Marie, which was confirmed to last 48 hours, as opposed to the usual 24 hour duration of a standard Splatfest.

Callie and Marie were from Calamari County, where they were born and raised. After they won Inkopolis' first annual Youth Folk-Singing Contest, they moved to Inkopolis where they began their career as announcers for Splatfests and musicians.

When first beginning Splatoon's Hero Mode, Cap'n Cuttlefish refers to the player as Agent 3, as they are the third agent of the New Squidbeak Splatoon to fight off the Octarians. He even states that the equipment given to the player is a hand-me-down from the previous two agents. Towards the end of Hero Mode, it is heavily implied that Agents 1 and 2 were in fact Callie and Marie, respectively. Among other clues, Agent 1 almost refers to Agent 2 as "Marie", and the Squid Sisters are seen reporting on the return of the Great Zapfish while pretending not to know how it came back.

After Cuttlefish is kidnapped, the Squid Sisters will serve as the player's mission control until DJ Octavio is defeated. Also, as stated in the Sunken Scrolls and the dialogue for refighting DJ Octavio, Callie and Marie started their career after they won a singing contest.

(Spoilers for Splatoon 2 below: approach with caution)

Between the event of Splatoon and Splatoon 2

After Marie wins Splatoon's final Splatfest, the two cousins begin to spend less time together. When Marie went on a holiday to visit her parents at their hometown in Calamari County, she could not find her cousin, and so recruited the player (who is known as "Agent 4") to search for Callie. In the Squid Sisters' absence, a news duo band, "Off The Hook", stepped into their place to host future Splatfests.

Marie returns as a major player in Splatoon 2's hero mode in Octo Canyon. This time, she is more open about her identity as Agent 2 and fills Cap'n Cuttlefish's role as Agent 4's main advisor and guide as the Cap'n is out on a research trip with Agent 3. As Agent 4 fights through the Octarian complex in search of the Great Zapfish, Marie reveals that Callie went missing at the same time and suspects Octarian involvement.

Eventually, she and Agent 4 discover that Callie has been brainwashed by DJ Octavio using his hypnoshades and are forced to fight him and Callie; as the battle continues, Marie is able to shoot off the hypnoshades with a Hero Charger, bringing Callie back to her senses and waking her up.

On January 30, 2016, a real-life Squid Sisters concert called "Shiokaraibu" (Japanese: シオカライブ, translating to "Squid Sisters Live") was held at Niconico Tokaigi 2016, a gaming event in Chiba, Japan. It starred digital projections of Callie and Marie, using unique, high-quality 3D models instead of those used in-game. They performed all five of their songs, most of them being extended or remixed slightly, ending with Calamari Inkantation.[1]

On April 29, 2016, the second live performance by the Squid Sisters was held at Choongakusai 2016, a music festival featuring a variety of popular artists.[2] The concert featured the debut of two new songs: Bomb Rush Blush and Tide Goes Out. They were solos sung by Callie and Marie, respectively. The following day, it was revealed that the new songs will be unlockable with the new Callie and Marie Amiibo figures launching in July.[3]

On July 8, 2016, their third live performance was held at Japan Expo 2016, a convention dedicated to Japanese pop culture in Paris, France.[4] It had the same set list as their second concert, with the dialogue in between songs shown in French. The live band's stage presence was also given more of an emphasis in this concert.

A live album featuring recordings of the first two concerts, Splatoon Live in Masuhari, was released in Japan on July 13th, 2016.

A fourth live performance was held at Niconico Cho Party on November 3rd, 2016. [5] They performed City of Color/Ink Me Up medley, followed by Maritime Memory and Calamari Inkantation.

On February 10, 2018, the Squid Sisters made a special appearance at "Haikaraibu" (Japanese: ハイカライブ, translating to "Inkopolis Live"), which was held at Tokaigi 2018.[6] After Off the Hook performed Ebb & Flow, Callie and Marie went on stage to perform Fresh Start, followed by Spicy Calamari Inkantation. Afterwards, both the Squid Sisters and Off the Hook performed Now or Never! as the finale.

Using the Squid Sisters' amiibo applies all the cosmetic changes of a Splatfest to Inkopolis Plaza, and the player can choose what song they perform. This is the only way to see the accompanying dances for these songs, with the exception of City of Color, the default for Splatfests.

In the manga series

The Squid Sisters first appeared in issue 1 of the CoroCoro manga Splatoon, where they announced the CoroCoro Cup. They are hosts for that tournament. They now often appear in issues starting with issue 2.

Marie's songs are in the Inkling language.

Callie: "Remember working here [Walleye Warehouse] part-time back in the day?"
Marie: "Yeah, and how often you broke the assembly line..."

Callie: "Rollers are super effective here!"
Marie: "Chargers are the very best, like no gun ever was!"

Callie: "Sigh... This Splatfest is going to be trouble."
Marie: "And make it double!"
Callie: "We'll protect Inkopolis from devastation!"
Marie: "And unite all squids within our nation!" 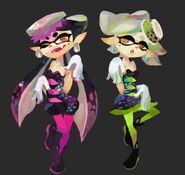 Callie and Marie in their youth.

Callie and Marie as they appear in Inkopolis

Marie dancing in the Splatfest.

Callie and Marie in different outfit colors for Splatfest

Marie dancing during a Splatfest

Official animation of the Squid Sisters and Judd, from a promo video for Splatfest 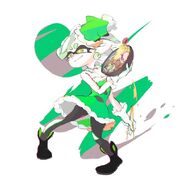 Callie and Marie waving at the inklings 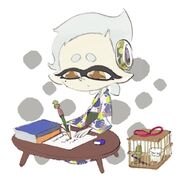 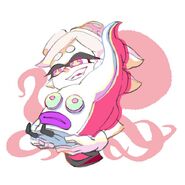 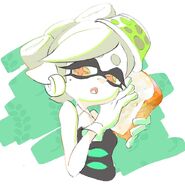 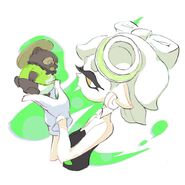 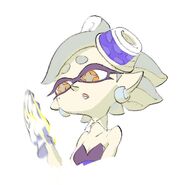 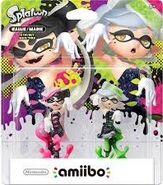 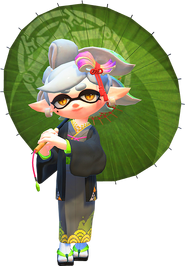 Marie with her green umbrella. 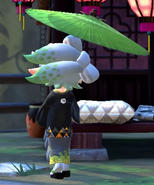 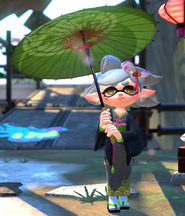 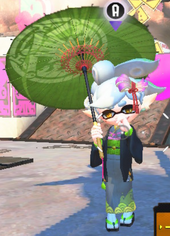 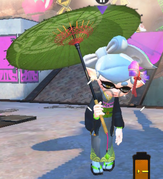 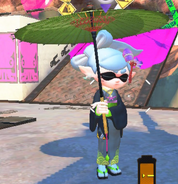 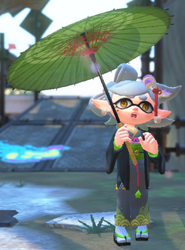 Marie looking back at a closeup 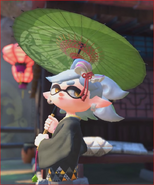 Marie looking to the player. 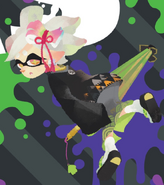 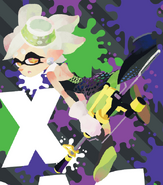