Female (According to Mr. Grizz's dialogue)

Lost Outpost
Marooners Bay
Salmonid Smokeyard
Spawning Grounds
Ruins of Ark Polaris
The Maws are one of the various types of Boss Salmonids that appear in the Salmon Run game mode in Splatoon 2, and Splatoon 3.

Maws are large eel-like creatures that prefer to hide under the surface of the ground. Only their heads are visible when they spawn.

The Maw submerges itself underneath the ground and jumps upwards after getting close to players. They move quickly enough to keep up with squid-form Inklings, and octopus-form Octolings, and their attack is an instant splat. Maws can travel vertically, unlike other Boss Salmonids by scaling up and down walls. A circular icon indicator displays their attack position before they attack upwards from the ground. If the player stands in the area of the icon, they will be launched in the general direction of where a Maws emerged. A small lure also indicates where a Maw is under the ink, allowing its prey to try to escape before being caught and splatted if they pay attention to where the lure is and if they are the target.

The Maw uses sonar to detect the location of prey while it swims underneath the ink.

The easiest way to dispatch them is to plant a Splat Bomb where they surface. If one is quick, they can shoot them during the few moments of their upward attack as well, but it'll take quite a beating to defeat them, as they are "rather robust".

Maws is one of the easiest boss to bring near the egg basket, so if the player is not in too much of a hurry, that is optimal strategy.

Being launched by Maws does not means instant death. There are ways to avoid being splatted, such as splatting a Maw before it closes its mouth and using the angle of the launch to get away from the Maw. Being eaten by a Maws, however, is. 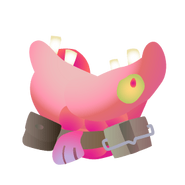 Icon of Maws from Splatnet 2.