Splatoon Wiki
Register
Don't have an account?
Sign In
Advertisement
in: Characters, Shop Keepers, Booyah Base,
and 6 more
English

Moe (Japanese: クマノ Kumano) is a clownfish who lives on top of Annie's head. He runs Annie's shop, Cooler Heads alongside Annie, brashly critiquing players based on their rank and style.[1]

Though Moe acts tough, he stubbornly refuses to leave Annie's head and never does anything on his own.[2][3] 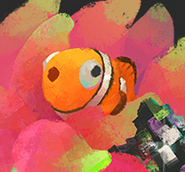 Artwork of Moe in Annie's hair.

Moe in Cooler Heads with Annie.

An example of Moe's dialogue.