The N-ZAP '89 is a Main Shooter weapon in Splatoon and Splatoon 2.

The N-ZAP '89 is a custom variant of the N-ZAP '85. Its sub weapon includes a Sprinkler to rapidly increase the amount of inked turf, and an Inkstrike as well doing what your points increase in a velocity fast the N-ZAP 89' is a weapon recommendable.

"A follow-up to the N-ZAP '85 , now with a sleek orange paint job. The sub and special have changed too, but its populatiry remains high as ever."

Sheldon's quote: "Ah yes, the N-ZAP '89 . This is quite simply an N-ZAP '85 that was redesigned for... legal reasons. It includes a Sprinkler to rapidly increase your turf, allowing you to fire off remarkably fast Inkstrikes! This set is excellent at striking where the foe least expects it. Good for lone wolves!" 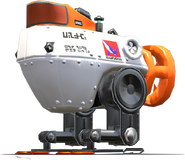 The Sprinkler is the N-Zap '89's sub weapon in Splatoon