The player takes the role of Agent 8, an Octoling that fell on the ground, and couldn't remember much about their life, who finds themselves in a strange subway station connected to a series of research facilities deep underground. As the game starts, Cap'n Craig Cuttlefish sees an Octoling and is ready to attack them before stopping, seeing that they don't have a weapon with them. Cap'n Cuttlefish then informs the Octoling that they and Agent 3 fought in Octo Valley before "something" attacked the three and caused the Octoling to lose all of their memories in the process.

Surprised, Cap'n Cuttlefish asks if they remember anything which prompts the customization of the player's Octoling. After finding a way through the beginning, Agent 8 and Cap'n Cuttlefish come across an empty platform with a lone telephone ringing. As the Octoling answers the telephone, the telephone identifies them as subject No. 10008; being too long, Cap'n Cuttlefish decides to give No. 10008 the name, "Agent 8" for short. It tells the Octoling that it would want to go the "Promised Land" so they can be free, but in order to do so, Agent 8 must collect the 4 "thangs" so they can have a way to the promised land. As the phone ends the call, a train pulls up towards Agent 8 and Cap'n Cuttlefish and stops for them. They then meet C.Q. Cumber who is the conductor of the train and explains the functions of the CQ-80 and the credits system. Shortly afterwards, Pearl and Marina make contact with the two of them and offer their help in escaping.

After collecting all four thangs, the telephone cryptically asks whether Agent 8 is "ready to ascend to a higher plane of existence" and "willing to become something greater than yourself" before using the thangs to seemingly open a door out of the Metro. It is soon revealed to be a trap, however, and Agent 8 and Cap'n Cuttlefish realize the thangs were parts of a giant blender that the Telephone plans to use to render them into raw material.

Before the blender can turn on, Marina is able to send a distress call, prompting Agent 3 to crash through the ceiling, kicks the telephone and destroys the blender. Agent 3 gets knocked out after doing so, but Agent 8 is able to use Agent 3's employee-model CQ-80 to activate an elevator to the surface after a lengthy escape, defeating a partially sanitized Agent 3 in the process. Once on the surface, Pearl and Marina prepare to airlift the Cap'n and Agent 8 to safety, but the above-ground section of the facility proceeds to rise from the ground, now revealed to be part of a human statue. The telephone introduces itself as Commander Tartar, an AI created 12,000 years ago to pass on human knowledge to any species worthy enough. The Commander has judged both Inklings and Octarians as unworthy of receiving its knowledge, and begins activating a weapon to destroy and recreate life on Earth, fueled by the raw material of the failed subjects that it seeks to use to create "perfect" life.

Marina, Pearl, and Agent 8 hurriedly put a stop to the statue, using Marina's prototype "hyper bombs" and a Killer Wail powered by Pearl's loud voice, dubbed the Princess Cannon. With the day saved and Commander Tartar destroyed, Pearl and Marina hug with Cap'n Cuttlefish celebrating and Agent 3 wakes up, Agent 8 watches and smiles at finally able to be free. The group then look out to Inkopolis Square, Cap'n Cuttlefish presses the CQ-80 and the staff credits play. After the credits begin to finish, Agent 8 looks back at the player and smiles at them. With the day saved, Off the Hook returns to Inkopolis Square, dropping off Agent 8 there as well.

When Agent 8 returns to the Deepsea Metro, Cap'n Cuttlefish informs Agent 8 that Agent 3 went out on patrol and he wished to check on the denizens of the deep for a while longer.

Octo Expansion adds a new single-player campaign consisting of 80 levels. Off the Hook will support Agent 8 from above ground, and their help can be used to skip some missions that are very difficult.

The normal Octarians from Octo Canyon are replaced with Sanitized Octarians, which are a distinctive shade of sickly green.

Enemy Octolings will be able to use more main weapons and special weapons, only seen in online multiplayer modes until now. For example, in the trailer, an enemy Octoling is shown chasing Agent 8 using an Inkjet.

After completing the campaign, players will be able to play as a male or female Octoling in multiplayer gameplay and customize them just like Inklings. Gear and weapons will be shared between the characters in the same account.

Purchasing the Octo Expansion unlocks the Studio Octophones and the Octo Layered LS. As soon as the player enters the game and finish the Inkopolis Square News, a box containing both pieces of gear will be in the center of the Square.

Agent 8 outside the subway

Female and Male Agent 8 in a green unknown liquid

Agent 8 unconscious in the beginning of the trailer 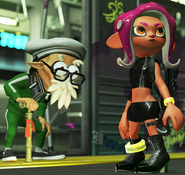 The ball about to collect rings

Agent 3's mind was hijacked by that crazy phone!

Agent 8's silence being taken as a yes