Splatoon Wiki
Register
Don't have an account?
Sign In
Advertisement
in: Bosses in Hero Mode (Splatoon 2), Bosses, Octarians,
and 5 more

Were you looking for the Octo Expansion variant? If yes, click here.

The Octo Shower (タコツボビバノン, Takotsubo Bibanon?, lit. Octopus Pot Bibanon) an Octarian/robot fighter and a fourth boss in Hero Mode of Splatoon 2. It is the guardian of the fourth area of Octo Canyon, Slimeskin Garrison.

The Octo Shower appears to be an enormous robot, vaguely shaped like a brass-and-copper shower head. The structure of it is rather simple, consisting of a number of metal protrusions hanging from the bottom of a slanted, blue ring that tops the machination, shaped somewhat like a shower cap, with the most prominent features of its chassis being its two enormous, circular optics on the front of it, covered by grates, that constantly glow red. Above the Octo Shower's 'eyes' are two small square vents that also glow red, partially obscured by its cap. Steam will blow out of these during certain actions, such as preparing an attack or recovering from being knocked to the ground. Resting on the Octo Shower's cap is a single, small, yellow rubber duck named Quackers.

On both the top and bottom of the Octo Shower are prominent circular holes. The bottom one serves as a bay that hides the Octo Shower's arms - two-segmented robotic appendages with blue rubber gloves for hands - as well as a variety of upscaled weapons that it holds using them, including a Charger, a crank gun, and a Sting Ray. The top one serves as an access for the control tentacle inside the machine; a large amount of magenta octo-ink can be seen within. Usually, this top hole is covered by a large, metal drain plug, with a number of chains connected to it. Octocopters with special yellow helmets constantly hold onto these, which, when using several at once, allow the Octo Shower to fly and, thus, move - without them, the Octo Shower is completely immobile and its control tentacle, exposed.

If one takes too long to splat the Octocopters, the Octo Shower will move across the arena and back out of range, requiring Agent 4 to chase it again. The first time the Octo Shower has to be fought, a Sheldon Request requires that Agent 4 use the Hero Charger. On subsequent revisits, however, a number of objects are added around the arena to compensate for the other seven weapons' shorter ranges, such as Ride Rails, Dash Panels, Bounce Pads, and Rolonium spawners.

Initially, the boss is carried by three Octocopters and uses two attacks:

After taking a hit and losing its first tentacle, the Octo Shower recovers by calling in four Octocopters to carry it back into the sky.

For its final phase, the boss is carried by four Deluxe Octocopters, with their ability to dodge left and right quickly, hitting them is less about using precise shots and more about using a large quantity of them. Offensively, the Octo Shower still uses the weapons from Phase 1 and 2, along with a Sting Ray that tracks the player while piercing cover. Once the Octo Shower's third and final tentacle is splatted, it tries one last time to summon help, only to collapse as no help is coming, and then begins to bounce helplessly as it begins to explode, before bursting apart in a large splatter of the player's ink, leaving the Zapfish behind to be collected and clear Slimeskin Garrison. 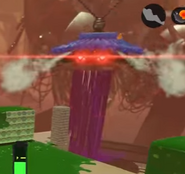 The Octo Shower without its eyes glowing.

A zoom out after the Octo Shower is defeated.

The Victory screen after defeating the Octo Shower.

The Octo Shower’s concept art, as seen in ”The Art of Splatoon 2”.
Community content is available under CC-BY-SA unless otherwise noted.
Advertisement