View source
watch 01:15
Who Are Off The Hook?
Do you like this video?
Play Sound

Off the Hook (テンタクルズ, Tentakuruzu?, lit. Tentacles), is a fictional pop duo serving as a form of replacement for the Squid Sisters in Splatoon 2 as the hosts of Inkopolis News in their studio within Inkopolis Square. Their voice actors are Rina Itou (いとうりな) and Alice Peralta, respectively.

They return in Splatoon 3, after scouted new members while on a tour, they reformed as a new band name Damp Socks feat. Off the Hook (ビジー・バケーション feat. テンタクルズ, Bijī Bakēshon feat. Tentakuruzu?, lit. Busy Vacation feat. Off the Hook). The band consists of Pearl, Marina, and three unnamed members.

Pearl is an Inkling with short, cream hair that has pink tips. She also wears a cream-colored crown on her head with pink at the tips. Her eyes are connected like most Inklings, and they are a golden color. She wears black finger-less gloves and has a white sleeveless dress with a high collar and golden zipper that is pulled all the way up. Pearl also has pink tights and white boots that, like her dress, have golden zippers that are pulled up. She also holds a microphone while singing. Pearl resembles a "pop princess" stereotype.

Marina's hair looks like a longer variant of the hairstyle worn by most NPC Octolings. It is black like an Elite Octoling's hair instead of the usual red of a standard Octoling, with a light teal color at the edges. Like most Octolings, her eyes do not connect in the same way that Inklings' eyes do, but hers are a silvery color as opposed to teal as well as eyelashes. Marina also wears a pair of black and teal headphones on her head. She wears a black bra with a large silver zipper with a star pulled most of the way down, and black low-rise shorts and fingerless gloves. She wears teal tights under her shorts and has black boots that, like her bra, have their silver zippers pulled down.

In Octo Expansion, Pearl, also known as M.C. Princess (or in the chat logs, MC.Princess) wears a more hip-hop attire than her pop stage outfit, resembling the rapper The Notorious B.I.G.. She wears a golden, jeweled crown on her head, a long, golden chain necklace with a plus symbol pendant (similar to her zippers on her stage outfit) around her neck, multiple golden rings on her fingers on both of her hands, a pastel pink, baggy hoodie with yellow sleeves, and rainbow metallic platform shoes.

In Octo Expansion, Marina, also known as DJ Hyperfresh (or in the chat logs, DJ_Hyperfresh) wears a more hip-hop attire than her pop stage outfit, resembling the rapper Tupac Shakur. She wears a white bandana that is wrapped around her head with light gray designs, a long, silver chain necklace with a infinity symbol pendant (similar to her zippers from her stage outfit) around her neck, a black wrist watch and black chain bracelet on her right arm, a white turtleneck crop top, light teal capris, and silver bowed, gray-white shoes. She also retains her headphones.

When the game starts up the first time in the 3.1.0. update, Pearl will put an Inkopolis Fashion Focus about a trend of "squidkids with weird hairstyles" which are actually Octolings. As the broadcast ends, Pearl says that that was the only best thing so she'll probably never do it again.

Off the Hook makes an appearance helping Agent 8 and Cap'n Cuttlefish by giving advice and commentary on Agent 8's tests. They meet the duo after Agent 8 passes Fake Plastic Station through Cap'n Cuttlefish's walkie-talkie as they were on Mount Nantai where the signal was the strongest, and Pearl and Marina call themselves MC.Princess and DJ_Hyperfresh respectively. If Agent 8 loses all of their lives in a test at least twice, Marina will offer to use Agent 8's test data and hack the Kamabo Corporation's data base to trick the test into thinking Agent 8 passed. If Agent 8 has less than 100 CQ Points, then Pearl will take money from her dad's wallet and Marina will transfer them into CQ Points.

After Agent 8 collects all the Thangs, Marina discovers it makes a blender and the Telephone that had them find the Thangs is intent on actually blending Agent 8 and Cap'n Cuttlefish into raw material. Before it can do so, however, Marina activates Agent 8's CQ-80's distress signal, summoning Agent 3 and breaking the blender and phone in the nick of time. Marina then sees an unconscious Agent 3's employee model of the CQ-80 and tells Agent 8 that they can escape through the hole Agent 3 made. As Agent 8 escapes the facility, Off the Hook shows up with a fleet of helicopters to pick them up along with Cap'n Cuttlefish and Agent 3.

As Pearl raps with Cap'n Cuttlefish again, the platform Agent 8 was on rises up and turns out to be a statue with the Telephone revealing itself as a sentient A.I. known as Commander Tartar, who is bent on destroying all Inklings and Octolings with his blast of primordial ooze to recreate the world as it sees fit. Marina analyzes the statue and discovers that the statue is charging up via sunlight. If they can cover it with ink with the help of her prototype Hyperbombs that Agent 8 has to manually detonate, then the statue will stop charging, and Pearl will then finish it off with a "Hypersonic Scream" to destroy the statue, but they have to do so within three minutes, or Tartar will destroy Inkopolis.

After Agent 8 detonates them all, the statue is going to fire anyway, prompting Pearl to drop onto the platform below the helicopter and activate her Special, a giant Killer Wail stylized with her crown and Off the Hook's Splatfest logo, known as the Princess Cannon. As the statue fires, Pearl lets out a giant "Booyah" and battles with the statue's blast before pushing it back and destroying the whole statue with pink ink, along with Tartar, who's last words are telling the professor who created it that their reunion beckons before perishing, never to threaten Inkopolis ever again. As the statue now collapses into the sea, Pearl and Marina celebrate with Cuttlefish, Agent 8, and a recovered Agent 3, and then watch the credits.

Pearl speaks rather bluntly using various slang words, matching a stereotypical rapper, as she appears to be (despite her "pop princess" appearance). Compared to Marina, she is more expressive and quick to jump onto topics with a bit of short temptations. Oftentimes her comments can be playfully sarcastic playing off her co-host.

Pearl originally had little to no idea how to write music, though she insists she had her heart in the right place. She demonstrated a notably more vulgar side with her song ‘‘#$@%* Dude Be #$@%* Sleepin’’

Pearl’s voice is capable of creating massive shockwaves. Sunken Scroll 1 shows an incident in which a young Pearl destroyed various parts of the Youth Folk-Singing contest, and Marina’s Chat has a clip during a death metal concert in which glass is heard shattering. When fully warmed up and amplified by her personal Killer Wail, the Princess Cannon, Pearl’s shockwave is concentrated into a powerful ink laser able to counteract a mostly-charged cannon designed to destroy all sentient life.

Pearl is also very protective of Marina, even after being told by Cap'n Cuttlefish of Marina's true nature as an Octoling and former member of DJ Octavio's army. Upon receiving the news, she remained loyal to Marina, including threatening violence against Cap'n Cuttlefish if he ever dared to splat her bandmate because of Marina's past in serving DJ Octavio and his Octarians.

Marina is more reserved than Pearl. She speaks in a sweet, gentle manner, very excitable, and can get very sassy in response to others, though she appears to be shy as well. While she is reserved, she isn't worried over expressing herself, given her visual design. She seems to be pretty forgetful at times and has been observed to forget the news she and Pearl are broadcasting.

Her timidity shows when she sees an Inkling watching her through the window; when she notices them, she smiles awkwardly and waves. This behavior most likely comes from the fact that many believe her to be an Inkling in spite of her different language and appearance, which are said to simply be some type of new fashion. Marina has not told Pearl of her past, and only talked to her about it after her file was extracted from Cap'n Cuttlefish’s Octarian database. She expresses fear over coming out to the public regarding her being an Octoling, but Pearl insists that she’ll be beloved regardless.

In Japan, Marina's speech is occasionally rendered in katakana, indicating an accent of some sort. Unlike DJ Octavio, she does not speak completely in katakana. However, in the Splatune 2 liner notes, her lyrics are entirely in katakana, which is supposed to show that her singing is in a different language.

Marina is shown to be an enthusiast regarding all sorts of technology, befitting her background as an Octarian engineer. She helps to design custom stages for each Splatfest, normally utilizing Octarian technology such as ink switches and grind rails. She’s shown having she had received multiple commendations as part of DJ Octavio's wasabi supply unit, but deserted shortly after hearing the Squid Sisters' Calamari Inkantation during Octavio's battle with Agent 3 in the first Splatoon. According to witnesses, her only comment was "This changes everything." When she first arrived at the Inkling world, she did not understand the language and had to learn it from Pearl.

Off The Hook is located to the left of the Shoal, inside their news studio, with the entrance to the Deepsea Metro located in the alley behind it near the shop where Spyke can be seen.

Pearl and Marina's songs are a mix of the Octoling language and Inkling language. Though it is a common misconception that Off the Hooks songs have English mixed in, that is false as seen in the official lyrics released with the Splatune 2 and Octotune CD's. 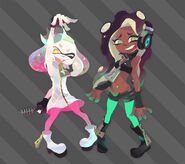 Pearl and Marina in Sunken Scroll #2. 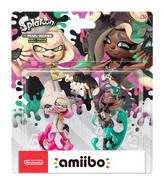 Pearl and Marina's alternate colors for the Family vs. Friends Splatfest

Pearl and Marina's outfits for the "Mayo vs Ketchup" splatfest 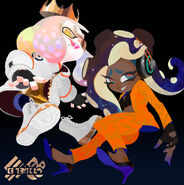