Male or Female (depending on customization)

Agent 3 (３号 San-Gō, Number Three?), Agent 4 (4号 Yon-Gō, Number Four?) and New Agent 3 are the protagonist Inklings of the single player mode, Hero Mode, and the player's character in multiplayer modes, respectively. They can be male or female, and their hair and eye color may vary, depending on the player's choice of customization at the start of the game.

As they are the Inkling who joins Craig Cuttlefish's New Squidbeak Splatoon to rescue the Zapfish, they are known as "Agent 3", as the other two Agents are the Squid Sisters, Callie and Marie (who are Agents 1 and 2 respectively).

In Splatoon 2, Agent 3 is away with Cap'n Cuttlefish, so another Inkling, the protagonist "Agent 4", follows Marie to find her missing cousin Callie and stop another Octarian theft of the Great Zapfish.

In Splatoon 3, Agent 3 is given the title Captain of the New Squidbeak Splatoon, replacing Craig Cuttlefish, who has retired and passed down his title. Leaving the position of Agent 3 open for new recruits.

Agent 3 can have a variety of appearances, depending on the player's choice of gender, skin color, and eye color, as well as their current ink color. They wear the Hero Suit, and can pick up armor (up to 3) to wear as well. They wield the Hero Shot by default, but can use a Charger or Roller for amiibo challenges.

Agent 4 can have a variety of appearances, depending on the player's choice of gender, skin color, eye color, and hairstyle, as well as their current ink color. They wear the new version of the Hero Suit, and can pick up armor to wear as well. They wield the Hero Shot by default, but are later able to use a variety of other Hero weapons given to them by Sheldon.

Agent 3 can have a variety of appearances, depending on the player's choice of style, skin color, eye color, and hairstyle. They wear a new version of the Hero Suit, of which two types, each equipped for different situations, have been confirmed so far. Although having different appearances, both versions of the suit feature a backpack to store the little buddy.

Not much is known about Agent 3's background, except that they are at least 14 years old, since they have complete control over their squid and humanoid forms.

Agent 3 initially went to Inkopolis for an unknown reason, but got swept up in Cap'n Cuttlefish's quest to save the Great Zapfish. In Octo Valley, Agent 3 completes various missions to retrieve stolen Zapfish, defeating many Octarians along the way. Eventually, Agent 3 confronts DJ Octavio, rescuing the Great Zapfish and restoring Inkopolis' power supply.

In Splatoon 2, the role the player takes in single player has been replaced by Agent 4, and Protagonist was mentioned various times throughout the game, and is on a mission with Cap'n Cuttlefish.

Agent 3 returns in Splatoon 2's Octo Expansion. Agent 3 retains their original Hero Suit, now also wearing a gray torn cape with a number "3" in Inkling text. When Agent 8 collects three of the thangs, Cap'n Cuttlefish will decide to make a "Missing" poster for Agent 3 which will have the player determine Agent 3's gender, skin color, and eye color.

After Agent 8 collects all four of the thangs, the Telephone builds it and tricks them and Cap'n Cuttlefish inside to kill them until Agent 3 busts in from the ceiling and destroys the blender, responding to the CQ-80 distress signal. Agent 3 is then rendered unconscious and Cap'n Cuttlefish stays behind to look after them as Agent 8 goes through the hole Agent 3 made. The remains of the Telephone then attacks Agent 3 which has their mind partially sanitized and hijacked into tying up Cap'n Cuttlefish and attacking Agent 8 before they can leave.

After being defeated, Agent 3 is once again unconscious and wakes up after Agent 8 defeats the NILS Statue and Commander Tartar and now has a band-aid on the back of their head on as the staff credits roll. When Agent 8 comes back to the Deepsea Metro, Cap'n Cuttlefish tells them that Agent 3 went back on patrol, explaining their absence. After Agent 8 completes all the tests, a locker in the Central Station will open and Agent 8 will remember everything to their battle with Agent 3 which prompts another arena fight between the two agents.

Agent 3 is armed with their Hero Shot Replica and has an arsenal of special weapons at their disposal. They will always enter the arena by a Super Jump and activate Splashdown upon landing. They'll go after Agent 8 while throwing bombs and their Hero Shot has the fire rate of a regular Splattershot, they're also able to swiftly dodge away similar to the Drop Roller ability when taken hits by Agent 8's Octoshot.

There are different phases which has Agent 3 use different specials: They'll use the Baller, the Curling Bomb Launcher, the Sting Ray, and repeated Super Jump Splashdowns. Agent 8 can shoot the Baller to stop Agent 3, shoot at Agent 3 when deploying Curling Bombs, throw bombs when using the Sting Ray, or shoot at Agent 3 when they briefly stop after using the Splashdown.

The battle of Agent 8 and Inner Agent 3's has them don the classic Splatoon colors of blue and orange, respectively. Inner Agent 3 now has different specials at their disposal as well as having Autobombs instead of Splat Bombs. Inner Agent 3's Hero Shot has no spread to it and will always shoot straight.

The arena is now significantly smaller with no inkable walls or platforms with only the floor being the only inkable surface. With each phase, Inner Agent 3 has a different special: Inkjet, Bubble Blower, Autobomb Launcher, and Tenta Missiles along with Splashdown. When defeated, Agent 3 is called "Inner Agent 3", representing Agent 8's inner hero.

Agent 4 initially went to Inkopolis for an unknown reason, but got swept up in Marie's quest to save the Great Zapfish and her cousin Callie. In Octo Canyon, Agent 4 completes various missions to retrieve stolen Zapfish, defeating many Octarians along the way. Eventually, Agent 4 confronts DJ Octavio and a brainwashed Callie, rescuing the Great Zapfish, freeing Callie, and finally restoring Inkopolis' power supply. 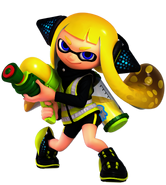 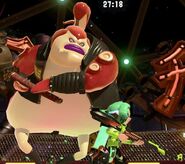 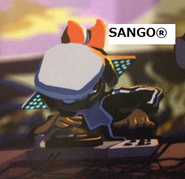 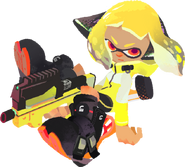 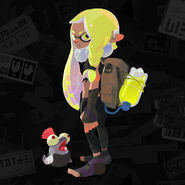 New Agent 3 with their Smallfry

The Protagonist and their partner, Little Buddy, on a train.

The Protagonist with one of their hairstyles