The Scrapper is one of the Boss Salmonids appearing in Salmon Run.

A Salmonid on a motorized life buoy, protected by a shield of pieces of scrap, this is what a Scrapper is. They move at a normal speed, shield facing forward, leaving a trail of ink behind. The motors it has on its sides produce a constant stream at close range, even while not used to move forward, which can damage players too close. His back is not protected, and hitting him there is how one can defeat it.

If the Scrapper is attacked from any direction, it will stop and face his attacker. While it is stopped, it will progressively repair the damage dealt to him until it is functional again. In this state, the Scrapper can still turn around, and will do it to constantly face the player that hit him first, stopping to do so once once that said player gets too far away. From there, he will face another player if he is still attacked.

Once his shield receives enough damage, its motors will fail, sealing his ability to turn until his shield is completely repaired. It is important to notice that during this state, his side plates and motors slide sideways. While this allows players to hit his weak spot from the sides, it also make it so that it's harder for someone in front of it to go behind it, as it can easily block a narrow passage in this state. Once he is stunned like this, he will be more vulnerable to hitting his weak spot and splatting him. He can easily be heard approaching due to his motors making loud noises like that of a boat engine when nearby.

The Sting Ray can be used to bypass the shield and hit the Scrapper directly.

If you know someone else will take care of the Scrapper from behind, simply be sure to deal enough damage to distract it for a few seconds and you will be able to leave your teammate take care of it without having to break his shield completely. You can also use the Sting Ray to bypass the shield and hit the Scrapper or throw a Splat Bomb behind it. 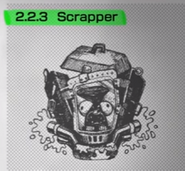 Sketch of a Scrapper in the Grizzco Manual.
Community content is available under CC-BY-SA unless otherwise noted.
Advertisement