Splatoon Wiki
Register
Don't have an account?
Sign In
Advertisement
in: Characters, Shop Keepers, Booyah Base,
and 13 more
English

Sheldon (Japanese: ブキチ Bukichi) is a horseshoe crab who owns Ammo Knights, a weapons store, at the Inkopolis Galleria.

Click here to show or hide spoilers.
In Splatoon 2, he joins the New Squidbeak Splatoon to assist Marie and Agent 4 in rescuing her cousin Callie from DJ Octavio's control, personally driving his truck, with the Squid Sisters' logo on the sides and a stage on top of the trailer for Marie, into the stadium where Agent 4 was battling DJ Octavio and Callie, allowing Marie to shoot DJ Octavio's hypnoshades off Callie and attempt to override Bomb Rush Blush with Tide Goes Out, until she begins playing Calamari Inkantation, which breaks Callie completely free of DJ Octavio's spell, and she rejoins her cousin on Sheldon's truck to perform the song together once more.

After Agent 4 destroys the Octo Oven, Octoboss of Tentakeel Outpost, Sheldon provides access to his Ammo Knights Enhancifier back where Marie is first met in Tentakeel Outpost so Agent 4 can upgrade their weapons or unlock sub weapons using the Power Eggs and Sardinium collected during the stages.

Sheldon is a genuine military fanatic and is fascinated by his weapons. He has developed nearsightedness due to staying up late every night messing around with small parts.[1]

Though he is a horseshoe crab, Sheldon wears his whole shell on his head, like a hat. He also wears a pair of orange goggles with a black strap, a khaki scout uniform with many badges/patches, a pair of polished dark brown boots, and a red scarf around his neck. He has buck teeth and pale yellow skin. 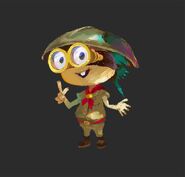 Sheldon in his weapon shop, Ammo Knights in Splatoon. 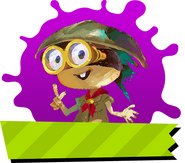 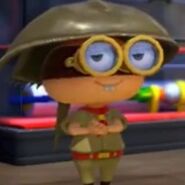