The Splat Bomb is a type of Sub Weapon in Splatoon and Splatoon 2. It is the basic Sub Weapon that every player starts with.

When a Splat Bomb is thrown, a second after deployment, it explodes and coats the area in its respective team's color of ink. It also splats any opposing teammates when close enough and if it doesn't splat them, it puts opposing ink color on them, meaning they could be attacked and splatted because their opposing team - the player's team - can track them on the map when they are covered in opposing ink (as long as they are not splatted). Splat bombs take about 2 seconds to blow up. Splat bombs aren't the best bombs, but they'll do the job.

Splat Bomb can be a very versatile sub weapon due to its property of exploding after a brief moment and ability to slide and bounce. 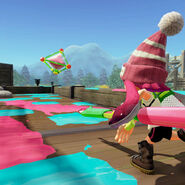 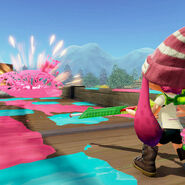 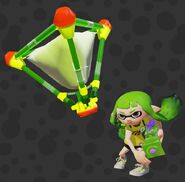 Retrieved from "https://splatoon.fandom.com/wiki/Splat_Bomb?oldid=51859"
Community content is available under CC-BY-SA unless otherwise noted.