Splatoon 3 (スプラトゥーン 3, Supuratūn 3?) is a third-person shooter developed and published by Nintendo, set to launch on the 9th of September, 2022. It is the sequel to 2017's Splatoon 2, and like its predecessor, will be released exclusively for the Nintendo Switch.

Splatoon 3 is developed and published by Nintendo. In an interview with the weekly Famitsu magazine from around July 2019, Splatoon series producer Hisashi Nogami said that after completing Splatoon 2, the team focused on the Octo Expansion DLC as well as updates and would not think about the future until completing version 5.0.0 of the game. This means that Splatoon 3 development had not started as of July 2019 and presumably started after the release of Version 5.0.0 on July 31, 2019. This is quite different compared to the timing of the development of Splatoon 2, which started immediately after Splatoon was released.

The game was first announced in a Nintendo Direct on February 17th, 2021, with a planned release in 2022. It will be the first game in the series to be localized into Korean and Chinese. On September 24th, 2021, more information was revealed about Splatoon 3 in a Nintendo Direct, including new special weapons, stages, and music, as well as the reveal of the single-player mode Return of the Mammalians.

On January 1st, 2022, the SplatoonJP Twitter account posted a Tweet for the arrival of 2022. The post included a video with an Inkling performing a victory pose along with a jingle while 2022 is written in ink. This revealed the return of the brush main weapon class, marking the final returning weapon class revealed.

On January 27, 2022, Volume 16 of the Splatoon manga was released with a teaser of Agent 3 arriving in Splatsville.

In a Nintendo Direct on February 9th 2022, Salmon Run Next Wave, a successor to Salmon Run from Splatoon 2, was revealed to be a mode in Splatoon 3, introducing new Boss Salmonids, Egg Throwing, and the King Salmonid. It was also confirmed that the game will be released in the summer of 2022.

On April 22nd, 2022, the release date for Splatoon 3 was revealed to be September 9th 2022. It was also revealed that the game will support cloud saves and that there will not be separate regional versions, meaning that all language options will be available to every player.

Splatoon 3 takes place about one and a half years after the events of the Splatocalypse, in a city named Splatsville (also known as the "city of chaos"), stationed within a region called the Splatlands. It is located far away from Inkopolis, the main setting of the first two games in the Splatoon series. Splatville's development increased rapidly as more Inklings and Octolings started to move to the city.

The outcome of the Final Fest is likely the reason the game’s design is seemingly themed around chaos.

The Splatoon 3 single-player story mode is called "Return of the Mammalians", and it is implied that mammals besides Judd and Li'l Judd will appear. This includes some kind of mutated Octotrooper with brown fur. However, other Octarians do make an appearance, such as Octopods and DJ Octavio. The story takes place in a new location called Alterna, a large, snowy area littered with Fuzzy Ooze. It also contains a rocket ship and portable research lab (where Callie, Marie, Craig Cuttlefish, and the Captain appear), a dark, mirrored city, and a neon-lit area with traditional Japanese items floating around in the background. The player's character is an Inkling recruited by the New Squidbeak Splatoon (specifically the Squid Sisters and the Captain) as the new Agent 3; the former Agent 3 from the previous games is now the captain of the group following Cuttlefish's retirement.

Like its predecessors, Splatoon 3 is a third-person shooter game focused on online multiplayer battles, in which eight players are divided into two teams of four. Players have two main forms and may switch between the two at will: their humanoid form, in which they can use weapons to spread ink and splat opponents, and their squid/octopus form, which, if they enter their team's ink while in the form, allows them to swim through ink at great speed, including up walls, recharge their Ink Tank faster, and hide. Players will have access to new movement techniques to dodge and expand the possibilities of attacks. A "squid roll" allows them to leap and twirl out of their ink, and a "squid surge" allows them to quickly swim up ink-covered walls and jump out at the top.

A new type of Spawn Point is used during online battles: an espresso maker-like cube called a Spawner Drone. It floats above the stage, allowing players to aim at their desired deployment location. After choosing where to deploy, the spawn point launches players to that location in squid or octopus form. The regular Spawn Point is seemingly available during the match.

It is said that Splatoon 3 will likely have Amiibos, like Splatoon, and Splatoon 2.

The game seems to have taken a twist as the terrain is now a dry desert. The trailer kicks off with the presumed player looking at an Inkling with a hood, goggles and dust mask over their face.

You then choose your species, Inkling or Octoling. You are no longer gender locked, instead you have "styles". It seems that Octolings are now normalized as you have a choice between both of them with no additional cost. Your character then removes their dust mask as you choose their skin tone. After that, the Inkling/Octoling removes their goggles and you get to pick their eye color. The choices you see seem to have quite a variety, as some of the options are multicolored or even tricolored. We don't get to see many of these, however, as the player in the trailer immediately goes to the simple yellow toned eyes with a bit of red around. They then remove their hood and you can choose from several different hairstyles. Then the Inkling stands up and you can pick from several different legwear options. As you finish customizing your Inkling/Octoling, it then switches to the Smallfry next to them. The only customization option for the "little buddy", however, is simply the hairstyle.

After you have completed customizing to your heart's extent, the Inkling/Octoling gets up and heads to a train that leads to the new hub, Splatsville.

Splatoon 3 will introduce some new weapons, such as a bow named The Tri-Stringer, which is a variant from a new weapon class: Stringers.

There also is new Special Weapons: Zipcaster, Big Bubbler, the Crab Tank the Killer Wail 5.1, and the Trizooka.

Replacing respawn machines, there is now an espresso machine-inspired floating cube that your player stands upon called a Spawner Drone.

A Smallfry was shown in the trailer named "Little buddy", functioning as a companion of some sort. However, as seen in the trailers, it will not accompany you in online battle modes.

Turf War is the main online mode of the game. The objective is to cover more ground with ink than the opposing team in three minutes.

In the Februrary 9th, 2022 Nintendo Direct, Salmon Run has been confirmed for Splatoon 3 as Salmon Run: the Next Wave. There are new bosses, presumably new stages, and more.

The hub world of Splatoon 3 is Splatsville, the city of chaos and the adrenaline-fueled heart of the dry wasteland. The region which homes this city is the Splatlands. The story mode of Splatoon 3 takes place in Alterna, with areas similar to Octo Canyon and Octo Valley's visual appearance.

Splatoon 3 introduces many weapons of all (and brand-new) types and classes. Over time, new models of the weapons will be released.

In addition to new weaponry, all of the Main Weapons from the original and the second game will reappear; but now come with different sets, new techniques, adjusted parameters, and recolored designs, altering their associated playstyles.

The Splat Bombs, Curling Bombs, and Burst Bombs all make appearances in the second Direct. The Suction Bombs and Splash Walls are revealed in the Release Date Revealed trailer. It is currently unknown if they will retain the same attributes from the previous games.

An Inkling with a Tri-Stringer in hand and a Smallfry next to them.

Inklings and Octolings in a Splatoon 3 Turf War.

The Crab Tank in action.

An Inkling standing in Splatsville. 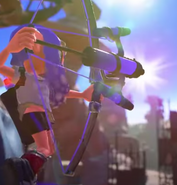 An Inkling ready to shoot their Tri-Stringer.

An Inkling and a Smallfry sitting on a train.

This player appears to be choosing their Inkling's hairstyle from a number of choices.

Official logo, without the "splat" border. 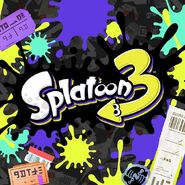 Promotional artwork for Splatoon 3, which previously served as @SplatoonJP and @SplatoonNA's Twitter banner. 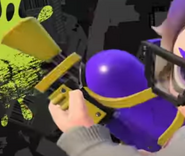 What appears to be the return of Splatoon’s “Inkzooka”, revamped into the "Trizooka".