The Splatterscope is a Main Charger weapon in Splatoon and Splatoon 2 .

The Splatterscope is a type of Splat Charger. This is one of the three weapons that has a scope, which allows the player to zoom in and target enemies easier. Like all Splat Chargers, it can be charged to fire ink at long distances, although it has just a little more range and less mobility then its scopeless counterpart.

"A Splat Charger fitted with a scope to allow for precision aiming. The range has been increased, but the field of vision is rather narrow."

Charger-type weapons generally are not used to cover as much turf as the Shooter or Roller weapon types. Instead, they provide cover and/or pressure to high traffic areas of the map, as well as key choke points, allowing the rest of the team to move more freely.

The Splatterscope has different stats but the same set as the Splat Charger. It offers less mobility and a little more range, but the strategy will be basically the same. While picking off open targets, you will want to be more aware of your surroundings - the scope makes it easier to aim, but limits your vision, which can easily make you miss an enemy close by. While running low on ink, you should make sure to check behind you to see if anyone has snuck up on you.

Tips for facing each weapon type 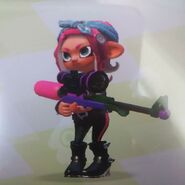 Octoling with the Splatterscope equipped.
Add a photo to this gallery