The Splattershot is a Main Shooter weapon in Splatoon and Splatoon 2. It is the all-around, standard weapon.

The Splattershot is an average, all-around weapon in terms of power, range, and rate of fire, making it an easy-to-use gun for players of all levels of experience, and comes in a set with the Burst Bomb and Bomb Rush.

"Developed after the Great Turf War, this weapon is easy enough for anyone to use. A great all-arounder with few weak points. A trusty companion through thick and thin."

Shooters are the backbone of (almost) any good team. They're versatile and varied with each weapon, and cover plenty of ground, as well as apply more pressure to the enemy team than either Charger or Roller weapons.

The Splattershot is the run-of-the-mill weapon, but can still definitely put in work equal to any other weapon when used correctly. It has average rate of fire and decent enough damage, and is equipped with the reliable Burst Bomb for consistent pressure against multiple enemies. Finally, the Bomb Rush special makes advancing near impossible for fear of getting completely overtaken in your ink, or just to cover a large amount of turf, as well as a free ink refill.

In Splatoon 2, the Splattershot's Bomb Rush gets replaced with the Splashdown, which can be used to escape a tight situation and kill nearby enemies if they are not careful.

Tips against each weapon type

【Splatoon】ブキ「スプラシューター」-0
The Splattershot in Action 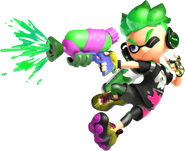 Add a photo to this gallery
Splatoon 2's Weapons
Retrieved from "https://splatoon.fandom.com/wiki/Splattershot?oldid=49961"
Community content is available under CC-BY-SA unless otherwise noted.