View source
watch 01:11
Who is Spyke?
Do you like this video?
Play Sound

Trading
Spyke (Japanese: ダウニー Daunii, Downy) is a character in Splatoon that is be found sitting in a back alley of Inkopolis Plaza.

Spyke is a slender sea urchin with pale orange-tan skin and a mass of black spikes with purple tips growing from his head that partially hide his face. He wears a poncho, multi-colored bracelets, and clogs. He sits on a rug that looks similar to his poncho. He also wears multiple bangles on his left wrist.

When players first visit him after reaching level 4, it enables them to order gear that other Inklings are wearing in the plaza. Players can order up to three pieces of gear at a time, but are only able to buy one each day. Additionally, the player will also have to wait one day before Spyke has it ready for them. If a player orders more then 3 pieces of gear, another order will have to be cancelled to make room for it and the new item will appear at the back of the queue.

Spyke's prices for gear are quite a bit higher than in the store. If the gear is not bought during the day its available, Spyke will get rid of it. Spyke will not trash gear in your queue in the days you don't play Splatoon.

Spyke has the chance to get the same abilities as the original wearer on the clothing you ordered. This chance goes up with the player's level, and the more abilities that the item has, the more expensive it is. Even if no additional abilities are obtained, the item's price is still increased.

Once players reach level 20, the player can ask Spyke to add a slot to existing equipment for the price of 30000 coins or one Super Sea Snail. If the equipment in question already has three sub-slots, then the player can use this to re-roll them. The main slot cannot be re-rolled.

Spyke can also be seen in areas with glass during turf wars and ranked battles. You cannot purchase anything from him during the battle.

During a Splatfest, Spyke can be seen tapping his hand to the beat of the Squid Sisters' music.

In Splatoon 2, Spyke's role is taken over by Murch, while Spyke can be seen in Splatoon 2's Inkopolis Square. Spyke appears to have become a successful businessman since the events of Splatoon, as he can be found in the café at the back-right of the square, in a fancy looking sliver and white poncho, and drinking coffee while looking at a laptop. He cannot be interacted with in any way.

During Splatfests, he can be seen enjoying Off the Hook's music like everyone else in Inkopolis Square, bobbing his head in time with the beat. 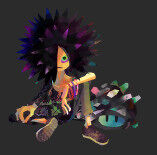