Depends on who’s the Stinger.

The Stinger is one of the 8 types of Boss Salmonid in Salmon Run.

The Stinger's appearance strongly resembles Chum, but it has an added scope on its left eye. This scope is connected to a mouth nozzle for him to blow a deadly blast at the players. The Stinger is also known to stand on the top of a tower of pots and pans stacked on top of a stove burner.

It fires a weapon similar to a Sting Ray from atop its tower. Its range varies, as it may either shoot at a player from the other side of the map, or at a player that's within, for example, a 10-foot radius of him.

More than one stinger can target a player, mostly this happens if the team doesn't defeat the stingers.

Artwork of a Stinger in the Handbook. 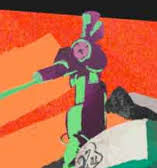 The artwork of a Stinger in the Splatoon 2 cover art.
Community content is available under CC-BY-SA unless otherwise noted.
Advertisement