He normally speaks like an actual human sometimes, but when you get to the final boss he disables that speech mode, indicating that humans where smart enough to add extra modes.

In its telephone form, it appears as an old-timey telephone box. Once Agent 8 has collected all four thangs, it connects its telephone body to the thangs, transforming the thangs into a blender under its control, attempting to blend Agent 8 and Cap'n Cuttlefish into raw material.

During the final boss battle, it appears as the telephone box with turquoise ooze seeping out, as well as a Sanitized Octarian tentacle poking out. The telephone also appears a bit damaged due to Agent 3's attack.

The Telephone is an AI created by a human scientist referred to only as "The Professor" 12,000 years prior to the events of Splatoon 2. Unlike Judd, it did not seal itself in a pod, and it sat for 12,000 years as it may be waterproof. Its purpose was to pass down all of humanity's knowledge to the next capable species, so as to prevent them from meeting the same fate as humanity.

The Telephone initially saw hope in the Inklings and Octarians, but eventually became repulsed by their evolution, needless wars, and fashion obsession, ultimately concluding that they were unfit for its knowledge and reprogramming itself to create a new form of life that would be worthy of its patronage, while also annihilating the existing lifeforms on Earth. The Sanitized Octarians are its creations, spawned from the biomass it collected from the remains of its previous test subjects and refined into "the perfect life".

The Telephone initially appears as an ancient-looking public telephone in the Deepsea Metro. It provides Agent 8 with two items: the CQ-80 and the CQ Card.

The Telephone then tells Agent 8 about the Promised Land that awaits them outside of the Deepsea Metro, and informs them that they must collect 4 thangs in order to return. Upon gathering all four thangs, however, they actually form a massive blender. The Telephone then tries to grind up Agent 8 and Cap'n Cuttlefish into raw materials, only to be stopped by Agent 3, and the Telephone seems broken.

During a lengthy escape, the Telephone attacks Cap'n and Agent 3, partially sanitizing the latter, hijacking Agent 3's mind into tying up Cap'n and attacking Agent 8. Their hijacked mind is broken when Agent 3 is defeated by Agent 8.

Following the defeat and Agent 8's escape above the surface, a gigantic stone statue emerges. In the hollowed out eye of the statue, the telephone appears and introduces itself as Commander Tartar and declares its intent to eradicate and recreate all life on Earth. The Commander activates a weapon from the statue's mouth; a massive cannon that threatens to destroy the entire world if fully charged.

Agent 8 manages to put a stop to it by inking the entire surface with the assistance of Marina's Hyperbombs, blocking off the statue's source of power. Despite this, the cannon is still able to fire, but is stopped by Pearl's voice-enhanced Killer Wail, with Tartar seemingly destroyed along with the statue.

Being an AI, Tartar does not have any major personality traits, though appears to have a hate for what it would deem the less important things in life, such as fashion and sports, and lets Agent 8 know as much before the final boss fight, saying it was "disgusted" by Inkling and Octoling culture. It seems to have been programmed to only recognize things that people need, and the Inklings' love for fashion seems unreasonable to it. As a result of this disgust building up over millennia, it ends up with a crazed, passionate hatred of life on the planet, seemingly being its only driving force. However, before revealing its true intentions, the Telephone initially appears friendly and helpful towards Agent 8, proving its capabilities of manipulation and deception to achieve its goal. It has a very futuristic AI. 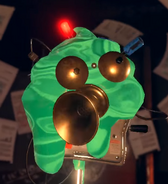