Harmony is the band's vocalist and synth player, a relaxed sea anemone who goes her own way. Since her voice is altered in the band's music, she usually lip-syncs during live performances. She is in charge of the band's visuals. She exhibits peculiar movements when singing and talks in a loose manner between songs, which is popular with fans. However, due to her lack of motivation, she is often late for practice. Similarly, to Annie, she has a bright color scheme and a small clownfish in her hair, which is dying due to neglect. In the band's second album cover, she is shown making music using various Nintendo consoles.

In Splatoon 3, she appears as the shopkeeper in Hotlantis, running the store in the manager's absence.

"Noijī" is the band's guitarist and backup vocalist, an uncontrollable, brightly colored Inkling. He has bright purple tentacles styled into large spikes and what appears to be four fangs instead of the typical three. He has a sunny disposition and epitomizes the band's energy. He was formerly a member of a punk band called BariBari and formed the Chirpy Chips with Raian later on. He likes big vending machines and has an irresistible urge to run on any slopes he sees, particularly one's going downhill.

"Raian" is the band's bassist, a shy flapjack octopus who does things at their own pace. Despite being an octopus, they bear little resemblance to Octarians and have not been connected to them. On both album covers, they wear a shirt referencing the album art of Pink Floyd's The Dark Side of the Moon, but with a squid-shaped prism. They are the band's composer, though they also compose their own music and quietly post it online. They like to make sure the band keeps a chiptune sound, but they dislike performing and standing out in public. They are an intellectual and geeky type who likes things that are strange and outdated.

"Shikaku" is the band's drummer, a crab who quietly watches over the others. They are the band's oldest member and have played for a number of other bands in the past, gaining a strong reputation for their musical techniques. They rarely ever take the lead, rather focusing on supporting the others. They are usually easygoing but are known to quietly snap once a year. In the band's first album cover, their shirt design has what could be the Inkling version of ZR button. 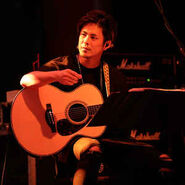